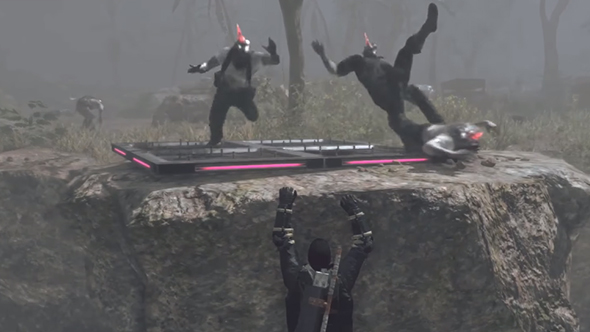 Despite the best efforts of Hideo Kojima’s most faithful fans, Metal Gear Survive continues to shamble toward its February release date, much like the crystal zombies that now populate the militaristic world of Big Boss. But look, everyone. We’ve still got Death Stranding, and our memories of the original MGS series, so bear with me as I say this: the new Metal Gear Survive footage actually looks pretty good.

While it’s largely been promoted as a co-op game, five minutes of new footage (courtesy of IGN) shows off Survive’s single-player. We even get a cutscene featuring an undamaged Mother Base, which throws everything I thought I knew about the game’s timeline placement—but the whole thing’s “apocryphal” anyway.

Instead, the cool bits are options you have for dealing with foes in the field. You can call in stationary defenses apparently anywhere in the world, letting you create chokepoints with fences or simply bring in turrets to mow down enemies. In one case, the player drops some kind of oil slick by a cliffside and drops down over the edge, while a crowd of zombies in pursuit is sent careening to their doom below.

It may not have quite the unrestrained ambition of Metal Gear proper, but given the sublime sandbox gameplay that was at the heart of MGS5, I’m eager for a reason to return to it. We’ll find out if Metal Gear Survive can, er, survive on its own merits on February 20. A beta will begin on January 18, but that will be exclusive to console players.

Original story, December 13 2017:Oh, Metal Gear Survive. It’s the game that nobody seems to want, with it being the most visible icon of themessy break-upbetween series director Hideo Kojima and series publishers Konami. Kojima’s off putting babies inside Norman Reedus while Konami are here with lengthy gameplay demonstrations, and yet people are still way more apt to side with Death Stranding here. Can’t imagine why.

Anyway, a new gameplay video hosted by producer Yuji Korekado shows off the game’s single-player story (which apparently is always online), which we’re now repeatedly reminded is an “apocryphal” “spin-off,” set “apart from the main Metal Gear Solid timeline.” As we’ve inferred from previous trailers, your character is Mother Base soldier sucked into a wormhole after the explosion at the end of Ground Zeroes. Six months later, a “mysterious organization” sends you to an alternate world.

That alternate world hosts some of the wreckage of Mother Base, but you’re on your own when it comes to food and resources, which means plenty of hunting, gathering, and crafting. Survival will entail a volume of bows, spears, and animal killing we haven’t seen since E3 2012. You can experiment to make your own cooking recipes, but for access to higher-tier items you’ll have to earn blueprints in multiplayer.

You will have guns, but ammunition will be scarce, so you might be better suited with melee weapons ranging from flaming baseball bats to giant sheet-metal swords. You’ll be able to craft items as advanced as oxygen tanks, which allows you to reach new areas obscured by poisonous fog.

Progress through the game comes by completing missions, with a variety of side-missions available along the way. Materials and items, along with a variety of characters from alternate worlds, will appear as you progress. There will be some stealth mechanics when you infiltrate quiet, zombie – sorry, ‘Wanderer’ – infested locations. All this gathering feeds back into your base camp, which you can continually upgrade and strengthen with new defences and facilities, like farms and water tanks. People you’ve saved will help you to develop the base.

If the like/dislike ratio of this demonstration on YouTube is any indication, people might still be feeling a bit skeptical about all this non-canon Metal Gear business. Perhaps they’ll be swayed by the open beta, which runs January 18-21 – but only on consoles, sadly. Metal Gear Survive will release on PC and consoles February 20.