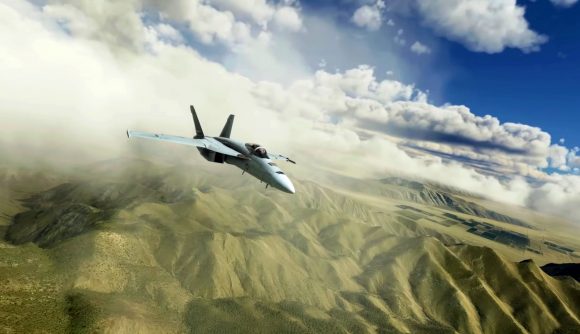 Microsoft Flight Simulator’s sim update IX is out today, and it adds some flashy new effects for certain types of high-speed flight. The update also includes bug fixes for weather, specific aircraft, and general stability, which should make your flights in the simulator game that much smoother once it’s installed.

Some of the coolest additions in sim update IX are for the McDonnell Douglas F/A-18E/F Super Hornet, a supersonic twin-engine combat jet used by the US Navy, the Royal Australian Air Force, and the Spanish Air Force. Sim update IX adds some new effects for the fighter – as you approach the speed of sound, you’ll see the distinctive vapour cone formed by the shockwaves the aircraft creates at ultra-high speeds as it moves through moist air.

You’ll also find that G-forces will trigger vortexes from the wingtips and wings on the Super Hornet, and flying at high speeds while close to surfaces covered in snow, dust, or water will kick up new visual effects. Just make sure to be ready to pull up in a hurry.

Naturally, not everything in this sim update has to do with the Super Hornet. The patch adds a new Spotlight Event landing challenge in which you have to land a Cessna 172 Skyhawk at Kingston Airport in Nevada – it’s a small, remote airstrip at the foot of the arid Toiyabe mountain range.

Sim update IX also switches Microsoft Flight Simulator over to Azure Neural text-to-speech technology, which should result in much more natural-sounding dialogue from air traffic controllers and other AI-controlled entities on your radio.

The patch notes have all the changes, which include a host of tweaks and enhancements for individual aircraft.