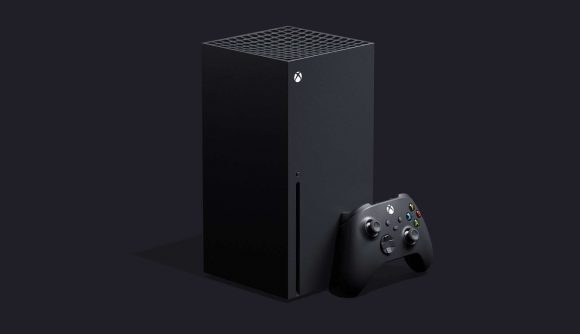 The new Microsoft Xbox Series X console, and the new Sony PlayStation 5, are going to be the first wee gaming boxes to ship with solid state drives as their main storage device. That could well be a literal game-changer for the next-gen consoles, and potentially a nightmare of weak-source PC ports.

But despite reports that the PS5 is going to have an SSD with “raw bandwidth higher than any SSD available for PCs” it looks like the prototype Xbox Series X consoles will have very much last-gen SSD speeds. A LinkedIn post from a former Phison employee has detailed the SSD controller that was installed into the Xbox Scarlett, and it’s a chip that only supports sequential read/write speeds equivalent to a standard PCIe 3.0 NVMe drive.

The Phison PS5019-E19T is a budget SSD controller that’s been designed specifically to connect over the PCIe 4.0 interface, doesn’t use a DRAM cache chip, and because it’s essentially been based on a PCIe 3.0 controller doesn’t have the performance we’d expect from a purestrain PCIe 4.0 device.

The post was surface on Twitter (via Sweclockers) and confirms that there will be a speedy little PCIe-attached SSD in the new Microsoft Xbox console. But if Sony thinks it’s going to have something beyond what most PC users can jam into the machines, it looks as though Microsoft is being a little more restrained about what it’s putting in its next-gen game box.

Phison itself details the PS5019-E19T as having peak sequential read/write speeds of 3,700MB/s and 3,000MB/s respectively, which isn’t far off the performance of the super-affordable Addlink S70 drive topping our list of the best SSDs for gaming. That’s a resolutely PCIe 3.0 SSD with rated read/write performance of 3,400MB/s and 3,000MB/s and uses a much older Phison PS5102-E12 contoller. 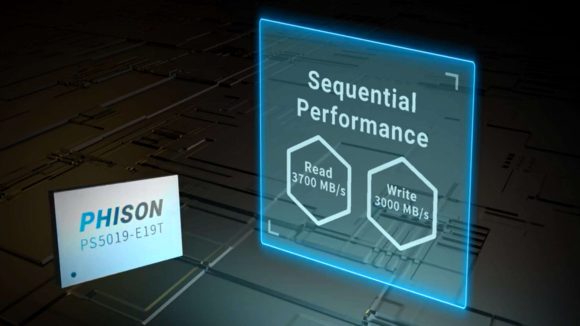 It does need to be stated that this is just the controller that’s been dropped into the Xbox Scarlett prototype box and isn’t necessarily the PCIe 4.0 controller that Microsoft will use in the final retail units. That said, dev kits are usually over-specced compared to their consumer unit cousins.

Microsoft may still drop a speedier controller into the mix, but realistically when you compare it to any console in existence today even the budget Phison controller will deliver storage performance exponentially faster than anything currently available. Just not compared to the PC, obvs.

Or potentially the PS5 which looks like it will be getting a Samsung SSD and controller. And we know how fast Samsung’s new PCIe 4.0 drives will be with the Samsung 980 Pro SSD getting outed at CES with almost twice the rated sequential performance of the Phison controller. that could be where the differentiation between the two next-gen consoles lies. With both running similar AMD technologies inside them it looks like Microsoft is aiming for a faster GPU and Sony a speedier SSD. 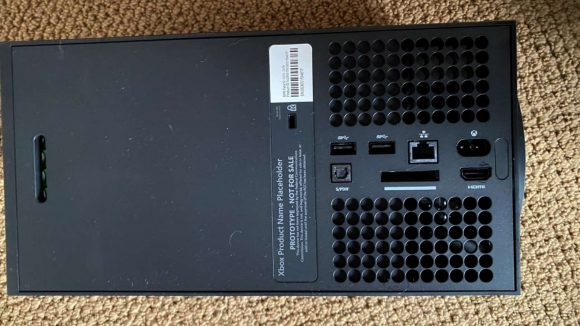 In other news… a few pics of the Xbox Series X prototype have been doing the rounds, and it looks like there might just be an internal PSU in the Microsoft console. There’s a two-pin power connector on there which looks a lot like a standard power plug, which would indicate there’s not going to be a power brick for the Series X.

Which also means there’s going to be a lot more heat generated inside that black tower aside from the higher-power CPU and GPU combination. There’s not a lot of venting on the rear of the machine so it looks like the main components are going to have to exhaust hot air out the top of the chassis.

We’re already placing bets on the number of Xbox Series X machines that overheat simply because someone has left a pile of game boxes on top of the vents.