What are the best artifacts in Minecraft Dungeons? If you’re still getting your head around artifacts and how to use them, we’ll explain everything you need to know about these equippable character abilities, including all the artifacts we’ve seen so far.

Artifacts are loot that can be found from enemy drops, in chests, or as an end of level reward. You can use them to aid you in battle by equipping them as abilities to your character. You have room for three artifact slots for your character, and can swap artifacts in and out at any point. This is especially handy if you need an extra boost from your ability in a certain situation. To equip an artifact, simply bring up the inventory screen and drag an artifact into one of the available slots below your character.

Artifacts range from common to very rare and you can salvage any old or duplicate artifacts for emeralds (the in-game currency). There are tons of artifacts to discover in Minecraft Dungeons, but here are all the artifacts we’ve seen so far.

Here are all of the artifacts we’ve seen in Minecraft Dungeons so far:

The explosive power of the TNT combined with the high velocity movement of an arrow – what could go wrong?

You hear distant howling as you hold the Tasty Bone in your hand. 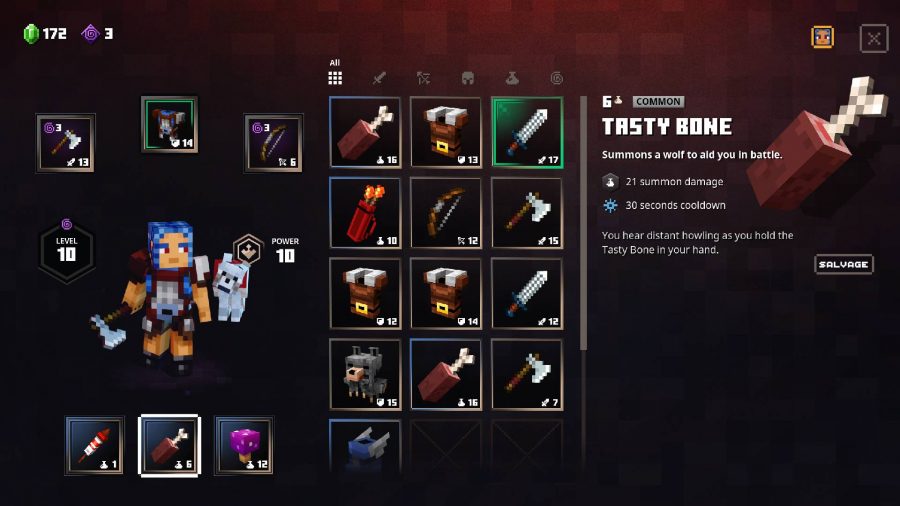 Eaten by daring warriors before battle, the Death Cap Mushroom drives fighters into a frenzy.

Boots blessed with enchantments to allow for swift movements. Useful in uncertain times such as these.

This quiver is filled with the deadliest of arrows.

We’ve also seen a Love Medallion artifact being used, one of the best items in the game, which makes nearby mobs friendly – we’ve not had the chance to use it, but be sure to keep an eye out for this special artifact. It’s not only Minecraft Dungeon artifacts that will aid you in battle, you can also use enchantments in Minecraft Dungeons to enchant your weapons and armour, especially if you’re trying Minecraft Dungeons on a higher difficulty setting.