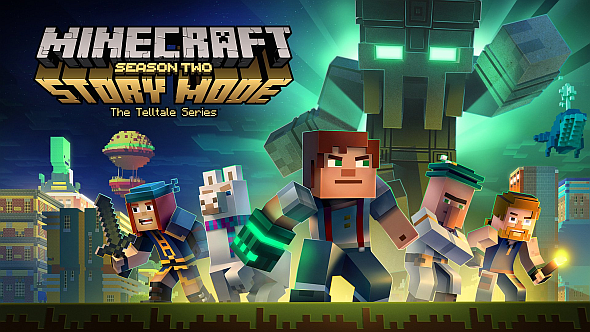 Update June 7, 2017: Rumours of Jesse’s continued existence were bang on.

Minecraft: Story Mode will be getting a second season, subtitled ‘A Hero In Residence.’ Its first episode will release on July 11.

For more grand adventures, have a look at these great PC RPGs.

Developers Telltale Gamesannounced the newsyesterday, following aleaked listing by the Australian ratings boardthe day before (they classified it PG).

Season two will have five parts and continue to follow protagonist Jesse. Apparently, “life just got more complicated” after becoming the world’s greatest hero – Jesse has new responsibilities, rivalries, and impossible expectations to contend with.

American comedian Patton Oswalt reprises his role as the male version of Jesse, and YouTubers Stampy Cat and StacyPlays will also return in cameo form. Season two will carry over your choices from the first season, but will welcome new players as well.

Original story June 4, 2017:The leaks are starting to trickle in for the next batch of Telltale games. Discovered via a recent entry on the Australian Classification website, Telltale’s Minecraft adventure looks to be getting a second season.

With a first episode titled ‘Hero in Residence’, the opening entry in the season was rated on June 2, according to the certification posting. From previous examples of unannounced games being revealed via ratings boards, it usually means that the title will be released within around two months of its certification. Seeing as E3 is also just over a week away, it’s fair to assume that Minecraft Story Mode: Season 2 will be officially revealed during the event.

My bet is that it will appear at Microsoft’s conference, as part of a demo for Microsoft’s Mixer livestreaming platform. Telltale have worked with Microsoft to develop its new Crowd Play feature for Mixer, where stream viewers can help decide dialogue options while someone plays a Telltale game. With this feature being exclusive to Mixer, I wouldn’t be surprised if Minecraft Story Mode: Season 2 is used as the live demo for Crowd Play during the conference.

Rumours of other upcoming Telltale games have been swirling about as well, according to posts from Twitter user AnEvilHag. Based on screenshots she acquired from a Telltale demographic survey, the company may also be developing a second season of Tales from the Borderlands and a James Bond Telltale series, alongside Minecraft Story Mode: Season 2.

As with any leak, especially around E3, take any supposed internal screenshot or art asset you see with a huge helping of salt. The images of the survey are blurry and could have easily been faked, but the classification of Minecraft Story Mode: Season 2 does lend some truth to this particular leak, as it was also included in the survey. All will no doubt be revealed at E3, so try to act surprised if any of these three games appear at a particular conference.