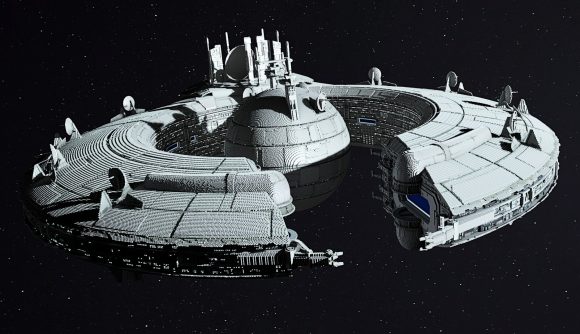 Minecraft builds are a large part of the community experience in everyone’s favourite game about punching down trees. There are many incredible things to see, from the functional, like this YouTuber who turned Pac-Man into a horror show, to the more traditional, like these stunning Civilisation VI cutscene replications. While a lot of these are simply unbound creativity, sometimes Mojang runs competitions to help inspire players.

The latest build challenge was all about Star Wars, with Mojang tasking players to recreate incredible things from the universe of Jar Jar Binks with blocks. The winner of this competition is someone called Ashwood, who recreated the Vuutun Palaa, a Lucrehulk-Class battleship that was in charge of the droids during the Naboo invasion in Episode 1: secretly the best Star Wars film.

Ashwood, who goes by Gumliii on Reddit, explains that the build doesn’t currently have an interior, but they are considering it. Gumliii has made a few Star Wars-themed builds that you can see on their Planet Minecraft page. They also commented saying that they’ll be uploading this one there so that you can download it and mess around with it. Just be aware that it has a diameter of around 1,300 blocks and uses the full height limit of 383 blocks too. It’s big.

The other entries in the contest include some stunning cityscapes and a recreation of famous models and battles too. If you’re looking at them and wondering how on earth people manage to put these things together, a lot of the larger ones tend to use plugins like WorldEdit to streamline things. Gumliii still spent two weeks building it, though, so it’s still a titanic effort even with the plugins.

I won the Star Wars Build Contest with this Lucrehulk Battleship! from Minecraft

If you’re into absurdly complicated builds, it’s definitely worth checking out this amazing IRL creation of a Minecraft piston made out of Lego. It even moves, although they didn’t make working Redstone, which is probably for the best.