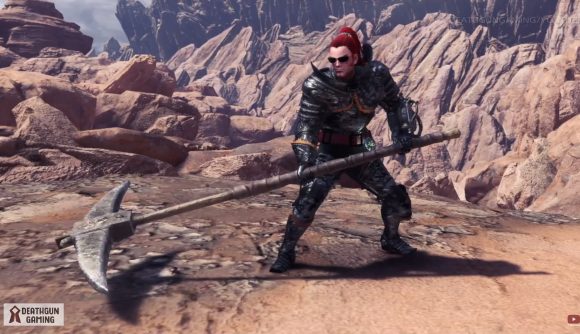 There’s a new piece of gear available in Monster Hunter World: Iceborne, and you’ve got until March 12 to get it. It’s the Mad Scavenger Pickaxe, and while it looks like the tool you’ve been using to harvest ore all this time, it’s actually a cleverly-disguised longsword.

That’s right – the Mad Scavenger Pickaxe is actually a longsword – not a hammer, which some players feel is the weapon family the pickaxe fits into more neatly. Regardless, it’s available as the reward for completing an limited-time Iceborne event quest called Scores of Ores.

Scores of Ores isn’t one of those ticky-tack little scavenging quests, despite the name. No, instead you’ll have to take on a tempered Brachydios – which can be a tough fight if you’re unprepared. You’ll need to be at least Master Rank 17 in order to take on the quest, which takes you to the Elder’s Recess.

Completing the quest will earn you two Pickaxe Tickets. You’ll need both of these, plus five Fine Brachydios Ebonshells, 15 Eltalite ore, five Meldspar ore, and 32,000 zenny to craft the Mad Scavenger Pickaxe. It is a rarity 10 weapon, with 825 attack, 20% affinity, 510 elemental blast damage, and 30 defence.

Again, you’ve got until March 12 to grab the Pickaxe Tickets. Once you have those, however, you can relax – as long as you have the tickets, you’ll be able to craft the pickaxes at the blacksmith’s shop, even after the special event is over. Scores of Ore is also a rotating event quest, so you’ll have plenty more shots at it if you aren’t leveled up to MR 17 already.

There are more monsters set to arrive in Iceborne in April, so the more weapons you’ve got in your arsenal, the better.