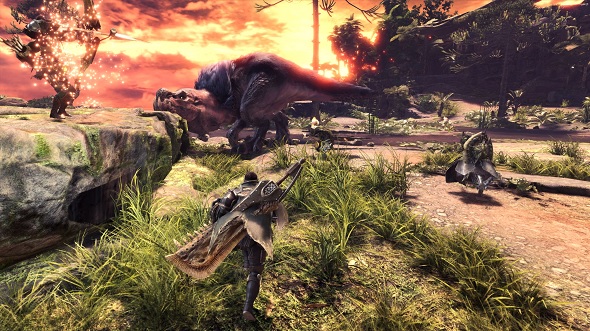 Update, January 12 2018: The developers of Monster Hunter: World have re-stated that their game will not contain loot boxes or microtransactions, as doing so would “create friction.”

Monster Hunter: World will not include loot boxes or microtransactions. In an interview with Trusted Reviews, series producer Ryozo Tsujimoto says to do so “wouldn’t make any sense.”

Find out how Monster Hunter World is shaping up to be the series most accessible entry yet.

Tsujimoto says that the coop nature of the game means that adding the option to buy better gear could lead to some players feeling left behind: “The idea is that there’s a harmony in the four players going out and you’re going to get on well together, if you feel someone hasn’t earned what they’ve got or they’ve got a better weapon just because they paid for it and you worked for yours, that creates friction.”

Tsujimoto also says that adding the ability to buy better gear and weapons would actually interrupt the Monster Hunter: World’s core gameplay loop. Later in the interview, he says, “Even when you get to a certain wall and you’re like ‘OK, I’m ten hours in, I suddenly have a monster I can’t beat’, it’s not about ‘well I’ll just throw a bit of money in and I’ll get better gear to do it’. What we want you to do is go back to your house and be like ‘well, I’ve been using the great sword, maybe I need to use the dual blades for this monster.

“We want you to go in and, through gameplay, find out what’s causing you to hit this hurdle and figure it out. Whenever you get over that hurdle by yourself, it’s such a great feeling, why would we let you skip that just to make a bit of extra money? It doesn’t make any sense. There’s no way we would interrupt that flow.”

Having mentioned the decision not to include microtransactions last year, Capcom have largely remained quiet on the issue until now. Tsujimoto says that it’s being mentioned again now to remind fans that loot boxes don’t make up part of the game: “We want to make sure nobody is under the impression that, because it looks like the kind of game where you might have loot boxes, they definitely aren’t in there.”

Original story, November 2 2017:Monster Hunter: World is taking plenty of cues from Western games to end the curse of the series’ mostly Japan-only success. One design trait it’s not looking to emulate, however, is the concept of loot boxes. At a recent preview event, the developers had some particularly emphatic words about how these types of microtransactions wouldn’t fit the game.

Series producer Ryozo Tsujimoto tells GameSpot that Monster Hunter is already around receiving random loot drops, and that’s part of the core satisfaction of the game, so “you’ve already kind of got loot as a core gameplay aspect without having to shove a microtransaction version of it in.”

“Our focus,” says Tsujimoto, “is on wanting to get people to play our action game and feel the kind of satisfaction that comes with the achievement you get with completing a hunt and getting rewards. We want people to have the experience that we’ve made for them rather than the option to skip the experience.”

Yuuya Tokuda, director of Monster Hunter: World, had a pretty similar response, saying that learning new skills as a player through hunting is what the game is really all about. “And then of course you get rewards of better items; but by skipping out on the part where you get better and hunt – if you’re simply getting more items – I don’t think that’ll be a very satisfying experience for players because it wouldn’t even necessarily make it that much more of a time saver if you haven’t got the skill to use the items you’ve gotten.”

Capcom’s games have hardly been immune to criticism over extra monetization – just look at the response to the DLC for Street Fighter V and Marvel vs. Capcom: Infinite – but it’s cool to see director and producer alike here specifically clarifying they’ve no intention of changing the core of their game.

PC players will have quite a bit of time before they can dig into MHW, though. Not only is the computer release trailing behind the console versions, it seems the beta is to be a PlayStation exclusive.