Medieval slugfest Mordhau now has a new multiplayer ranked mode and two new smaller maps. The latest update adds ‘Ranked Teamfight’, which pits three players against three other players in a fight to the death.

To accompany this new mode, Triternion has also created two new maps: ‘Arena’ and ‘Truce’. These two maps are both circular arenas that are smaller in scale, both of which have an audience watching the carnage unfold in the centre (For tips on how to get the audience cheering, check out our Mordhau tips). It won’t just be in Ranked Teamfight mode that you’ll be able to clash swords and shields in the new maps. Duel, Deathmatch, Team Deathmatch, and Skirmish modes will allow many bloodthirsty warriors to brawl for the audience’s entertainment.

Due to fan feedback, Triternion have also added the ‘Brawl Mixed’ playlist. This playlist is a matchmaking option that, “features 16-player Deathmatch, Team Deathmatch, and Skirmish on smaller maps.” It will replace the Battle Royale mode which apparently only 0.3% of players were bothering with. Battle Royale will still be available via community servers for those who really want to play it.

You can check out the trailer for this update below. 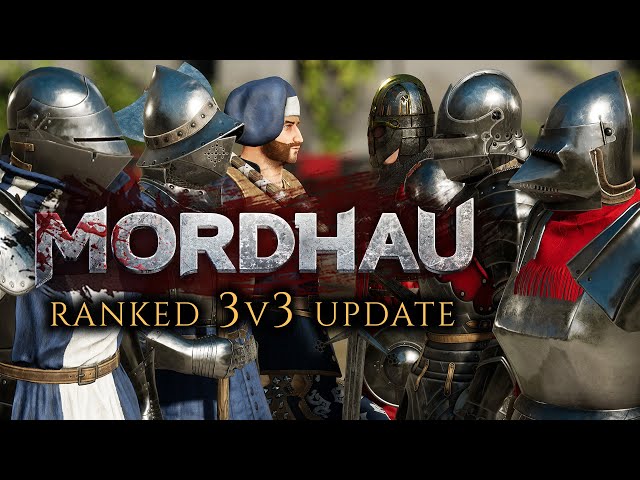 In addition to the news on maps and game modes, Mordhau also has 60 new cosmetic touches players can use to customise their fighters, and a brand new weapon called the Flax. It was a slightly curved long blade that, according to Wikipedia, originated in Thrace and Dacia and was adopted by the Romans for use as a siege hook.

Aside from bug fixes, the other things of note in this update are the six new perks. While Mule, Butcher, Stun, and Supplied aren’t discussed at all beyond their name, the trailer does show off Dwarf (perhaps not in the best possible light) and Tank – which in the trailer comes off as an ultra creepy medieval Jason Voorhees. These perks could be vital in creating some inventive loadouts, so do have a look at our Mordhau best builds guide for ideas.

If you want to know about all of the bug fixes, then you can check out the full Mordhau patch notes, which range from adjustments to crouching movement speed to bypassing the voice command cooldown.