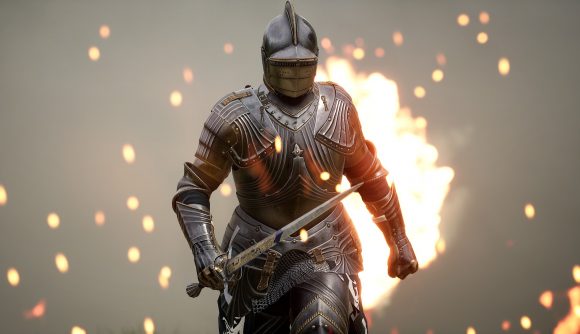 It’s May the Fourth, and you know what that means: It’s the 548th anniversary of the Battle of Tewkesbury, in which the House of Lancaster under King Edward IV defeated the forces of the House of York and temporarily restored political stability to England during the War of the Roses. Now that first-person medieval slash ‘em up Mordhau is out, you can relive Tewkesbury or any number of other bloody battles of the era – never mind all that silly space wizard stuff.

Mordhau features the usual lineup of medieval players – you’ve got your swordsmen, your knights, your archers, your crossbowmen, and your hapless serfs (okay, not them so much – although we assume they’re hiding in the woods somewhere). Typically, these classes each have a very specific role to play; for instance, a swordsman uses a sword to hit things that are fairly close to him.

But Mordhau gives you a couple additional options when it comes to swinging a sword. Flip it around and hook someone with the hilt or, apparently, fling one end-over-end at one of those pesky archers hanging out at the edges of a massive melee.

A redditor called Something_Syck uploaded a gif depicting just such a stunning throw earlier today. As they’re being pelted with arrows from afar, the character finds an abandoned arming sword on the ground. Looking up, they hurl it like a tomahawk at one of the distant archers.

It’s a throw of around 50 yards or so and, unbelievably, the sword strikes the archer right in the face, scoring a 152-point kill.

And my axe: The best Viking games on PC

One commenter called it “the old yeet and greet,” and I wouldn’t dream of trying to come up with a better description – other than perhaps the clip’s original title, which is “Fuck archers.”

Mordhau is out on Steam now, and players are leaving mostly positive reviews. The major complaint seems to be that servers are extremely full right now and that it can take a while to get into a game. But after seeing that throw, I’m keen to give it a try.