Nacon isn't a name you usually hear among the Logitech, Razer, and Corsair clickers, with the brand often prioritising the lower-end market. However, if your wallet can't stretch to our favourite budget wireless gaming mouse, the Corsair Harpoon RGB Wireless, the Nacon GM-180 still packs a punch while cutting the cord at less than half the price.

With a $19.90 / £18 MSRP, less than some options in our best mouse pad for gaming guide, it's easy to overlook the GM-180, but it has all the makings of a good mouse for FPS games: an optical sensor, a 2.4GHz lag-free wireless dongle, 30 hours of battery life, and even some of that RGB goodness found on premium alternatives. As with any budget peripheral, there are also some compromises, with a lower 2,200dpi limit and no software to customise the four options you can toggle between.

Although its slender size makes it a fantastic companion to the best gaming laptop, it doesn't look out of place sitting next to the best gaming keyboard that costs five times its price. Its flat design is much more suited to a palm rather than a claw grip, although it lends itself well to both right- and left-handed gamers with its ambidextrous shape.

The smooth plastic shell feels good to hold, with two grips either side to stop it slipping out your hand. You’ll get no surprises with the button layout, comprised of two side buttons, a scroll wheel, and DPI switches that adjust between 800dpi and 2,200dpi. 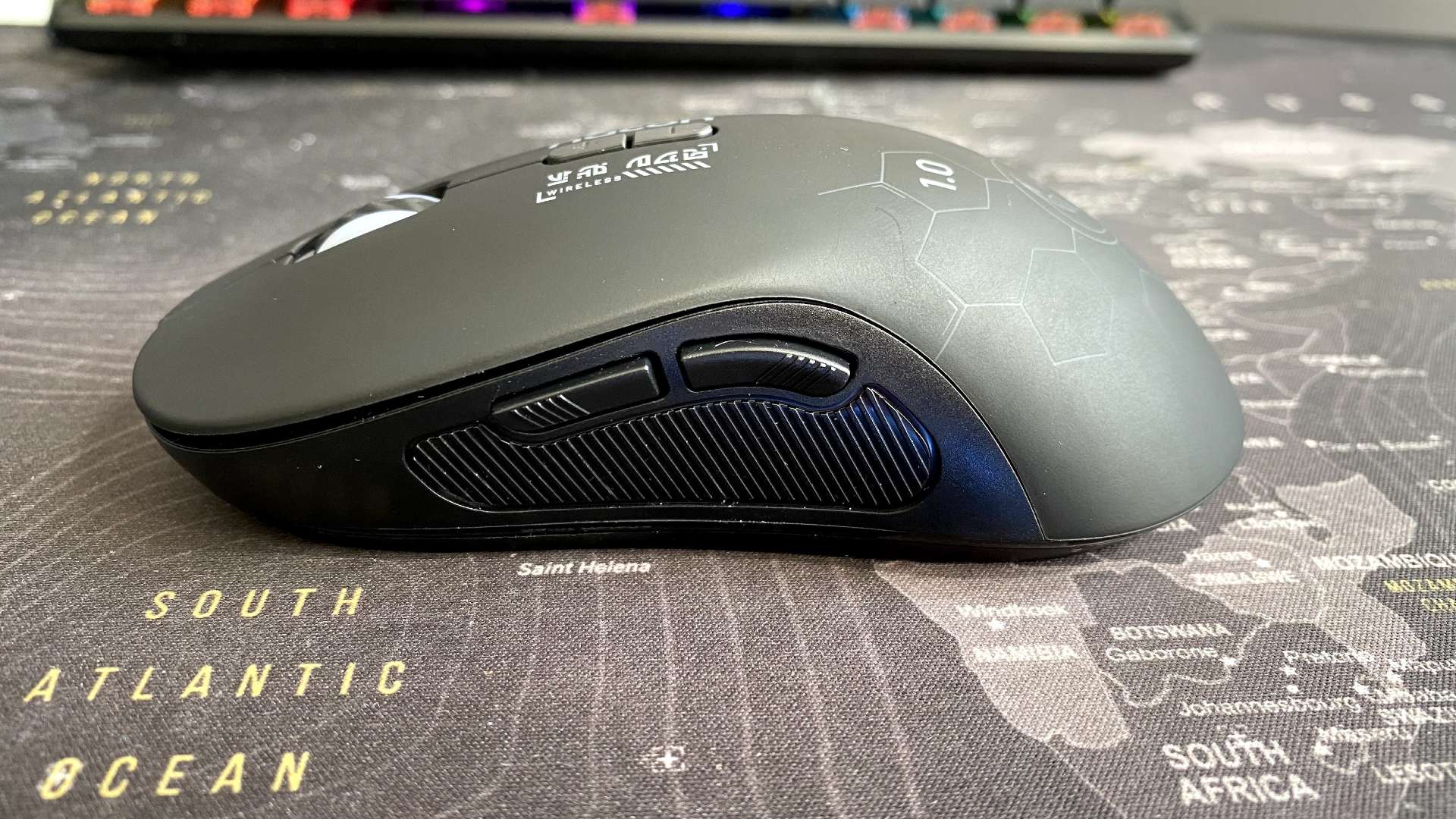 Nacon includes a AA battery that brings back memories of having to finish my game sessions prematurely, but rather than one you’ll continuously need to replace mid-game, this battery recharges whenever you plug the 70cm micro USB cable into the GM-180. It’s unusual to see, but this provides peace of mind that you can swap it out for a fresh one if the battery isn’t up to scratch in a year or two, compared to the inaccessible built-in batteries most brands run with.

When connecting wirelessly, the mouse pairs with a small USB Type-A dongle, which can be housed in underside of the mouse for easy portability. The choice of a 2.4GHz wireless connection rather than Bluetooth is great news for lower latency, but many similarly priced wireless models give you the choice of both.

Unfortunately, Nacon doesn’t provide a Type-C adapter, meaning the GM-180 isn’t a good fit for ultra thin laptops that only support the diminutive port – unless you buy your own, of course. Unlike the dongle, though, there’s nowhere to store it on the device, so you’ll have a task on your hands not losing it while on-the-go. 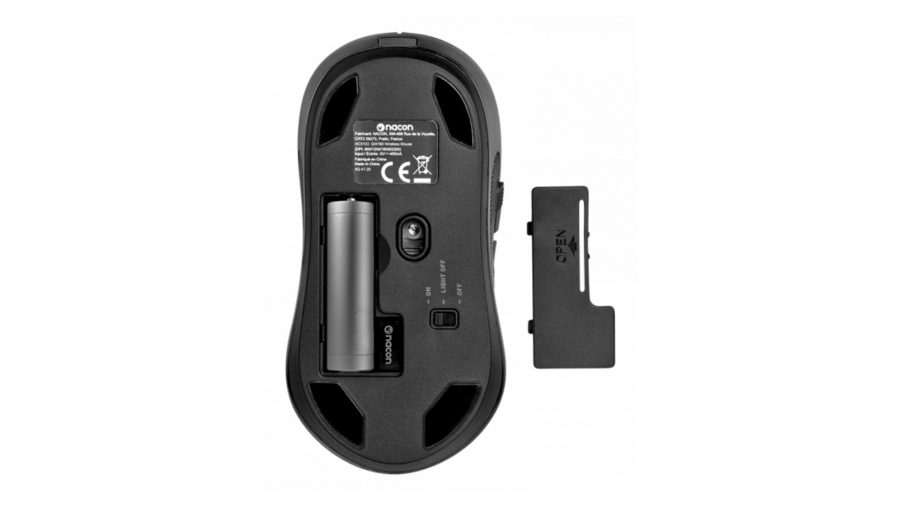 The RGB lighting is nice and bright, but if you want it to match your other flashy components, you’re out of luck. You can turn the illumination off through the power switch on the bottom, but it doesn’t come with software to adjust the colours. This is also a point of pain when it comes to the DPI, which has four presets you can’t change. If you don’t like 800dpi, 1,200dpi, 1,600dpi, or 2,200dpi, then this mouse isn’t for you.

At around 100g, the GM-180 is fairly hefty for its size. This is abundantly clear from the first stroke, as it doesn’t glide quite as smooth as lighter mice. While this isn’t a dealbreaker for me as a casual CS:GO player, it could be problematic if you’re a competitive gamer that prefers a higher sensitivity. Otherwise, the mouse is solid for shooters, with precise left and right mouse buttons that respond well to rapid clicks. 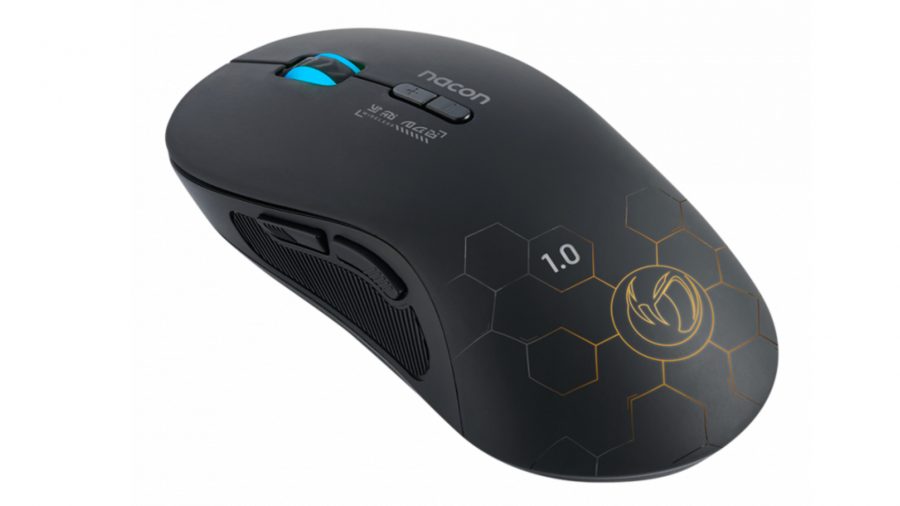 With such a low price tag, Nacon’s GM-180 is one of the cheapest wireless gaming mice on the market. When you’re looking for a mouse on a tight budget though, you have to question whether you want most of your money going towards that cordless luxury or an improved sensor.

As expected, it doesn’t contend with the best gaming mouse, and you’ll get a more accurate sensor and controllable RGB lighting if you opt for the wired Logitech G203 – which is marginally more expensive with its current discount at $29 / £22. But, if you’re set on a wireless mouse to help you manage cables and travel with, Nacon’s GM-180 holds up well enough in most games for the price you pay.

Nacon's wireless clicker isn't packed with features and won't suit those that need a specific sensitivity, but it packs enough value to warrant consideration if you want a stylish wireless gaming mouse with an optical sensor on a budget.