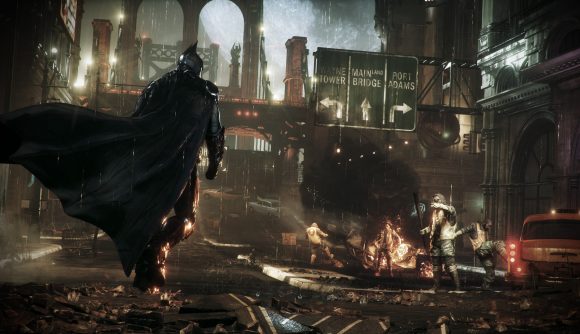 September 23, 2019 WB Games Montreal has made an even more direct Batman game teaser.

WB Games Montreal has now launched its second Batman teaser in as many days. The latest tweet from the studio – which previously developed Batman: Arkham Origins – says “capture the Knight / cape sur la nuit,” and features many of the same Batman-oriented symbols that made a more subtle appearance in yesterday’s teaser.

There’s no official indication of when we can expect to see the subject of this teaser revealed in full, but many fans expect a proper announcement at Sony’s PlayStation-focused State of Play presentation on September 24 at 13:00 PDT / 16:00 EDT / 21:00 BST. There’s no guarantee we’ll see the Caped Crusader there, but you might want to tune in just to be sure.

As for the teaser itself, it’s a more obvious collection of the same symbols that had a more subtle appearance in yesterday’s tweet. As Chris Capel, PCGamesN’s resident DC comics expert, explains, the fourth symbol, which looks like an evil demon’s head, is a clear reference to Ra’s al Ghul. Ra’s appears in Arkham Knight’s DLC, which Chris says featured two factions vying for control of the organization – and the symbol appears in Arkham Knight itself.

@WBGamesMTL is proud to celebrate Batman’s 80th anniversary with rest of the world during #BatmanDay #Batman80 pic.twitter.com/4VGz9kBWxj

Notably, this is the first time the studio has tweeted since 2015.

People who have responded on Twitter seem to think the other symbols reference the Court of Owls, a criminal organization introduced fairly recently in the Batman Vol. 2 series in 2011. They’re supposedly a shadowy organization that has been controlling Gotham since colonial times, and they employ a cadre of undead assassins who may or may not be human-owl hybrids and/or undead, depending on which storyline you’re following.

Chris thinks it’s unlikely that they’re involved in a new game. His guess is that the other glyphs shown in the video represent factions within Ra’s League of Shadows. For the moment, there’s no way to be sure.

In the meantime, you can get a half-dozen Batman games for free over at the Epic Games store right now. Come to think of it, the timing on that promotion is pretty notable, too…