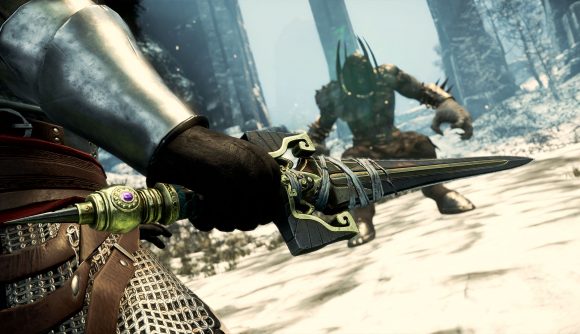 You’ll soon be able to declare war more easily in New World, which will come as a big relief to anyone getting bored of this peacetime nonsense. Some companies in the MMO have found themselves unable to declare war on others, but Amazon is hopeful this issue is fixed now – although there are still other war-related matters to be dealt with.

Recently, players as part of companies in New World had discovered that they were seemingly unable to declare war on various territories, despite believing they were above the required 10% threshold for throwing the territory into conflict – which is currently hard to track so players often weren’t sure.

Well, Amazon Game Studios reports in its latest dev blog that it believes it has “resolved most cases of this” – particularly in regards to fixing a bug in a recent update where “many players from a faction all turned in PvP missions at the same time” meant that the influence from these quests wasn’t being counted properly. The team asks players to report if it’s still going on, however.

However, the team acknowledges that there are other war-related problems it still has to face, including the issue which sort of caused the other problem – New World not displaying a company’s influence contribution correctly so players can see if they should be able to declare war or not. The team is “looking into” this issue but has “no timeline for this yet”. Amazon says that it is also aware of players having trouble selecting a tier of war camp but it has “not been able to track down the issue yet”.

Elsewhere in the blog post, the developer has backtracked on its assertion that cross-region server transfers were “not possible” and is now looking into them, but don’t expect to see a minimap in New World anytime soon.