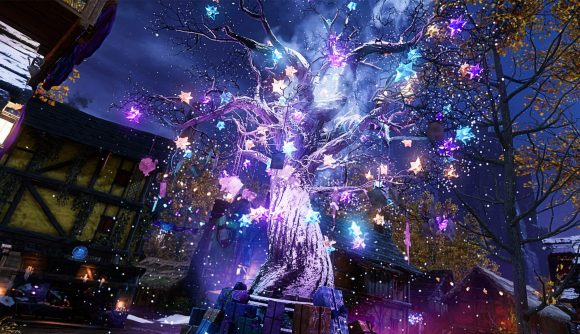 It’s the most wonderful and festive time of the year, so New World is getting some suitably merry content to tide players over for the Christmas period. It’s not all snow and tinsel, though, as Amazon Games is also testing some new endgame and crafting features on the PTR to alleviate some players’ concerns.

The Winter Convergence features festive villages, jolly activities, and some rather grinchy yetis. Four towns in Everfall, Monarch’s Bluffs, Weaver’s Fen, and Brightwood have been spruced up by a quest-giving NPC called the Winter Wanderer, with the land between now blanketed in snow and dimly lit by northern lights in the sky. If you seek out the Winter Wanderer, you’ll get an array of holiday quests to complete. The Convergence Spirit is a special town project that involves decorating a particular village, Lost Present Recovery is about recovering goodies from Frigid Folk, and Gleamite Collecting is about seeking out festive meteor showers to collect the glittering debris once they’ve nestled on the ground.

If you fancy some action, you can adventure to one of the new Ice Caves that have appeared due to the Winter Warrior’s desire for a permanent winter. If you enter one, you’ll find yeti trying to use their powers to freeze up and make snowfall.

One of the more eye-catching features is the new expertise and Gypsum systems. Amazon Games explains that, based on the feedback to the high water mark system, the team is testing some significant updates to the endgame.

“We’ve added a new resource called Gypsum that can be acquired each day by doing a variety of activities (open-world named bosses, expedition bosses, outpost rush, arenas, corrupted breaches, etc.),” Amazon Games says. “Each activity rewards a different type of Gypsum that can be crafted into a Gypsum Orb. These orbs can then be crafted into Gypsum Casts of any weapon, armour or trinket type. Opening a Gypsum Cast will guarantee an expertise bump and gear of that type.”

You’ll also find that the developers have renamed high water mark to ‘expertise’ and that the game will now display your current expertise level on each slot on your avatar. The team explains that the change should make it easier to track your progress. 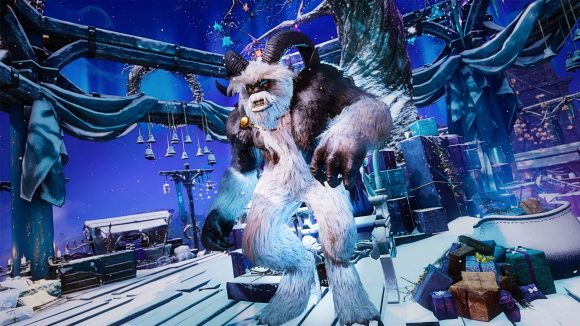 You’re also getting two new endgame points of interest where you can challenge yourself with complex content to progress your expertise with level 66 enemies and elite chests. Also, both Malevolence in Edengrove and the Imperial Palace / North Dynasty Shrine have been levelled up to 66.

Amazon Games is also introducing trade skill aptitude to keep rewarding you for crafting items. Upon reaching level 200 in a trade skill, the levelling circle will now update to show three markers equidistant from each other on the circle. You’ll progress through them as you earn more experience points, and gain rewards such as raft mods, special ingredients, schematics, and recipes when you reach one of the markers.

Each marker offers better rewards than the last, and Amazon clarifies that racking up enough experience points to go all the way around the circle will increment the aptitude counter by one. “This counter will keep counting so you can keep track of how many times you’ve wrapped your progression around the top level”, the developer says.

You’re also getting a new reward type called ‘equipment patterns’, which are crafting artefacts that enable you to craft gear with a guaranteed score of 600.

Amazon Games is testing plenty of other content, too. Alongside PvP tweaks, you’re getting several new side-story territory quests in Restless Shore and Mourningdale alongside a new housing-associated quest series. If you’d like to see the PTR patch notes for yourself, you can find them here.

We recently got the chance to talk to game director Scot Lane. We chatted about the early and mid-game for solo players and even festive content, which seems pretty apt right now.

If you haven’t tried Amazon’s MMORPG but fancy giving it a go, our New World beginner’s guide is a great place to start.