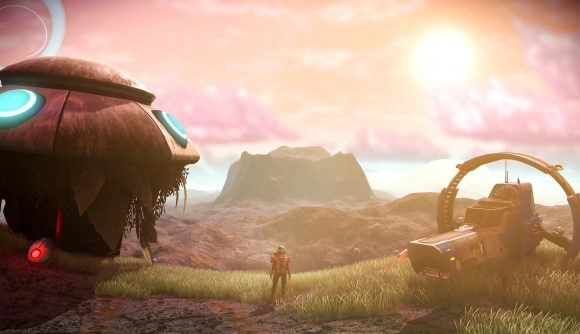 No Man’s Sky has received some big updates since its launch, with Foundation, NEXT, and the upcoming Beyond (among others) bringing a host of features to the game. But while Hello Games has brought plenty to the space exploration game, studio founder Sean Murray says that from launch, the game has largely worked exactly as he wanted it to.

In an interview with PCGamesN, Murray says “No Man’s Sky, when it released, for what we wanted it to do, we kind of felt like it was largely complete. I would have killed for a little bit more time to work on the game. But I would sit and play it and think, ‘Yeah, it evokes the kind of emotions that I wanted it to evoke.’” These feelings that he wanted to evoke were largely based on something you might not expect – loneliness, as he goes onto discuss.

“Things that I sat down and years before talked about with other people on the team – there’s very few games and make you feel lonely, right? It sounds weird to want to make you feel lonely [laughs], but that kind of thing. But very few games and make you feel a sense of awe or wonder, or whatever. I felt at times, like not all the time, but occasionally we were hitting those things. So, I was really happy, I knew to an extent that the game would be a bit polarising, but that was really unique. I hadn’t really seen that that much before.”

It sounds, however, like Murray’s been happy to bring other gamers on board who might be looking for something other than the theme of loneliness in the game too. He says he was “super happy to see that go out and it felt finished, but we were still talking about, ‘Oh, there’s so many things we wanted to do with this game.’” He adds “it’s been fun to build on that, and say, ‘You! Gamer, over there. You are not interested in playing a game about loneliness but you can own a freighter now. So, I’m a big believer in that and stuff that we do.”

Given this, you might be wondering what the life cycle of the game will be – and Murray doesn’t seem set on that just yet. He suggests that as long as the studio stays “creatively inspired” by the game, it could continue working on the game, perhaps for a while to come, but says that “we kind of make no promises there” and acknowledges the balance that needs to be struck between No Man’s Sky and the “other things we’re doing”.

What these “other things” are isn’t totally clear at this point – perhaps the new game that’s “big, ambitious, and silly” previously teased. But one thing we can look forward to soon is the release of No Man’s Sky Beyond and then a ‘Hello Games short’, The Last Campfire, in the future – if its trailer is anything to go by, it looks like it’ll be an enchanting adventure of its own.