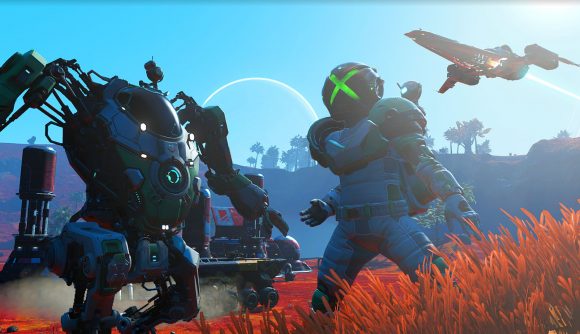 No Man’s Sky, Hello Games’ space exploration game, is getting a Windows 10 PC version “very soon”, founder and programmer Sean Murray has announced on Xbox Wire. Plus, if you’re yet to try the 2016 title but can’t wait for it to hit the Windows PC store, you’re in luck – it’s currently on sale on Steam for 50% off its regular price.

In addition to news that the space game’s headed to the Xbox Game Pass next month, “opening up our universe of possibilities to over 10 million” pass members, Murray also announces Hello Games’ further PC release plans. “In addition,” he reveals, “we can also announce that next month we’re bringing a Windows 10 PC version of No Man’s Sky to the Microsoft Store.

“Our PC fanbase has always been among our most active and devoted and we are overjoyed to be able to count Windows 10 PC gamers among them for the first time very soon,” he adds. While there’s no exact release date to make a note of just yet, it sounds like it won’t be long before we see the game hit the Microsoft store.

Following the two big updates to the game this year – the Living Ship and Exo Mech updates – it seems Hello’s got something else up its sleeve for June, though it looks like we’re going to have to sit tight for more details on that for now.