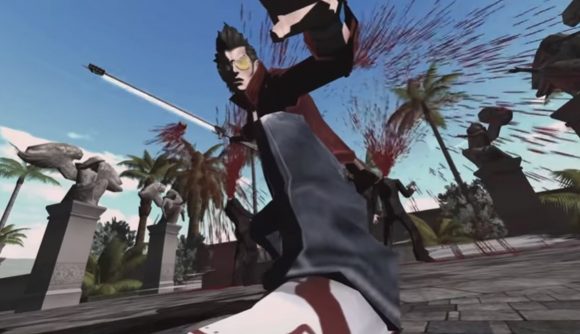 After PC players finally got a proper taste of Travis Touchdown action last year, Travis’ first two adventures have been rated for release. No More Heroes and No More Heroes 2: Desperate Struggle are now both rated by the ESRB for PC.

In separate posts on the ESRB website,  Windows versions of the action-adventure games have been appropriately flagged and categorised. Blood and gore, intense violence, and sexual themes are common to both, while Desperate Struggle boasts partial nudity, too. The descriptions in either give some hints as to the kind of, shall we say, suggestive dialogue the characters in these crime games tend to throw around.

Developed by Grasshopper Manufacture, and directed by Goichi ‘Suda51’ Suda, the first two No More Heroes games came out for the Nintendo Wii in 2007 and 2010, respectively. They follow the exploits of Travis Touchdown, an incidental assassin who decides to try and become the world’s greatest hired killer. Things just weirder and more absurd from there. The first is an open-world game, but each is structured slightly differently, all carrying the same heightened Hollywood pastiche humour and tone. We’re likely getting the same ports of the two that were released on Nintendo Switch in October.

In 2019, Travis Strikes Again: No More Heroes came out on multiple platforms, including PC, and served as a soft reboot for the series, not being a strict follow-up to the previous entries. However, No More Heroes 3, a proper sequel, is slated for the Switch in 2021 – don’t get too invested in any timelines here.

No word on a possible release window, but we’ll keep you informed. You can check Travis Strikes Again on Steam here.