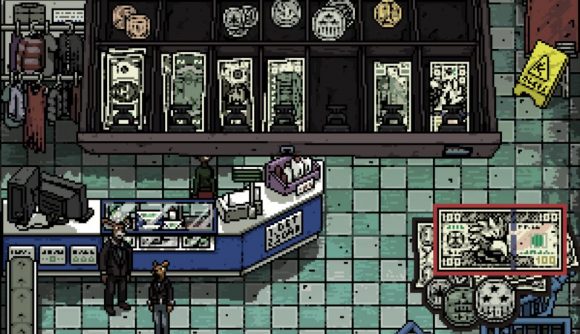 A company that was on track to become Spain’s version of Devolver Digital has closed its doors and its directors have left the country, leaving behind them unpaid debts, heartbroken employees, and a lot of unanswered questions.

Sindiecate was an independent games publisher which had worked with a studio called Brainwash Gang to produce Nongünz, a “nihilistic action platformer” that came out in 2017. The two directors of Sindiecate, Fernando Ortega and Claudia Ancajima, had formed a relationship with Nongünz creator Edu Verz, and were working on his next game, a gritty open-world action game called Damnview.

But according to reporting by Teknautas, the environment at Sindiecate broke down into toxicity, and in late 2018, the publisher resembled a “telenovella episode,” as one employee, Juan de Torre, put it.


The details of the breakdown have been collected and translated into English by Madrid-based developer Rosa Carbo-Mascarell, who created a Twitter thread based on Jaume Esteve’s Teknautas story.

The article details an atmosphere of distrust, tension, and backbiting at Sindiecate, before it eventually closed its doors one day in December 2018, emailing employees to tell them they had suddenly been given a Monday off. When the workers met up that day at a nearby cafe, they learned that many had been working without contracts for years, some as illegal freelancers.

“This is what has kept me awake the last months,” tweeted Carlos Gurpegui, a narrative designer for Brainwash Gang, as he shared a link to Esteve’s story.

A major point of contention, it seems, was the rights to Damnview. Ortega and Ancajima sought to push Verz off the project, asking the game’s programmer and artist if they could complete the game without Verz and promising them money if they would agree with their plan to edge him off the project.

They would not, and instead immediately told Verz what they had learned. Eventually, the parties came to an agreement that Verz and Brainwash Gang would retain the rights to the Damnview intellectual property and be allowed to publish it elsewhere, so long as Sindiecate was promised a cut of the game’s eventual profits to reimburse the publisher for its investment in the game thus far.

But the day after the unexpected day off, employees got another email informing them that they were all “on holiday” until the following month. Since then, nobody involved has heard from either Ortega or Ancajima, and Esteve was only able to contact their lawyer, who told him the couple was in Peru. Sindicate has effectively vanished, leaving 12 people jobless and owing an estimated €30,000 in unpaid wages.

Last few months have been tough. We broke relationships with our (now former) publisher due to a series of lies, slander and toxic environments created by the board of the publishing company, Sindiecate Arts. pic.twitter.com/n3HHsxxZ01

It’s a sad and disappointing turn of events for Sindiecate’s employees. Esteve writes that many hoped the publisher would be ‘the Spanish Devolver Digital,’ acting as an incubator for regional game development projects. Instead, he writes (via Google translation), “the closure of Sindiecate is another torpedo to the waterline of the Spanish videogame industry – another one.”