Speaking at the Credit Suisse Annual Technology Conference, Nvidia’s Colette Kress has stated that two of every three desktop graphics cards it sells now come with ray tracing enabled. That sounds like a ringing endorsement of Nvidia’s ray tracing strategy from the PC gaming public, despite there previously being a little reticence about signing up to this expensive new generation of graphics cards.

Though there might need to be a note of caution added to this glorious tale of Nvidia kick-starting a new world order of PC game graphics, a world where reflections, refractions, and shadows look more real than any pre-canned effect. While all of its current 16-series and 20-series graphics cards are technically capable of ray tracing – indeed even the 10-series can join in – that doesn’t necessarily equate to a pleasurable experience or indicate that gamers are using the future-looking feature.

“Our ray tracing boards, that we sell in desktop,” says Kress in response to an incredibly leading question, “two-thirds of it is now with ray tracing. So we’re really pleased with the market adoption of it and of course there is absolutely more room to grow.”

Taken in isolation that sounds like the RTX cards, from RTX 2060 to RTX 2080 Ti are filling Amazon shopping baskets the world over. But what Nvidia’s CFO goes on to say after could be taken to suggest she’s including some of the GTX graphics gang in that too. 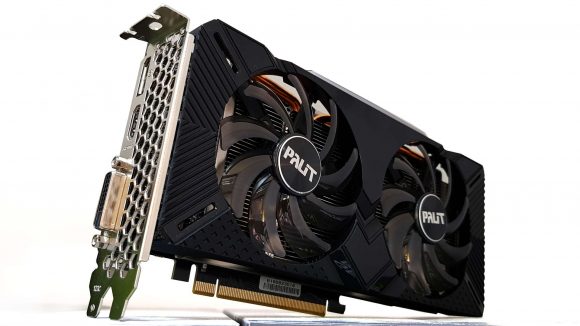 Sadly there are no $100 cards that will let you participate in ray tracing with the closest being the $150 GTX 1650, and even then it will be a pretty nightmarish experience of missing textures and slide show frame rates. Kress is also underestimating the price of the RTX 2080 Ti, which is $1,100 at its very cheapest.

It would, however, be beneath us to make mention of Nvidia’s CFO getting their numbers wrong.

Nvidia seemingly seeing its GTX graphics card sales as counting towards the burgeoning ray tracing ecosystem would seem a mite disingenuous. Though without having the sales figures available it is possible that two thirds of Nvidia sales are RTX cards, and all Kress is referencing is the fact that it has ~$100 GPUs for gaming on sale, as well as ultra-enthusiast cards for those who wish to get involved in ray tracing.

After all, it’s surely pretty obvious that no-one picking up a GTX 1660 Super is going to indulge in getting their mainstream GPU ray tracing… at least not twice anyways.