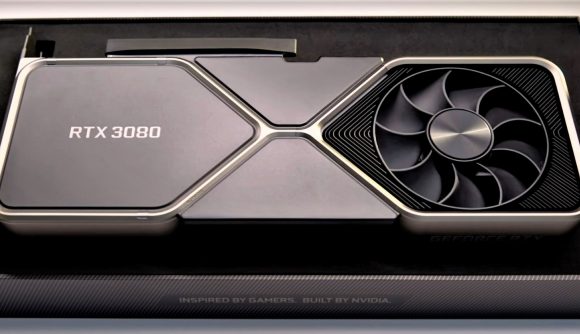 Rumours of Nvidia’s impending RTX 3000 series refresh are ramping up as of late, with various leaks citing a 20GB RTX 3080 Ti and even desktop gaming PC variants of the RTX 3050 and RTX 3050 Ti. However, despite previous reports that the green team is also planning a 16GB RTX 3070 Ti model, the graphics card grapevine now says that a new RTX 3080 with 12GB instead of 10GB could be in the works.

Posted on Chiphell by form user Vermicelli, the revised RTX 3080 card will launch alongside the GeForce RTX 3090 Ti, RTX 3070 Ti, and the new version of the Turning based RTX 2060 – a card that will also supposedly come with 12GB. In addition, sources close to Videocardz also suggest new RTX 3080 SKU also suggests that the current 10GB model will be discontinued.

Of course, bumping the RTX 3080 seems like a subtle, but potentially useful upgrade that could benefit games like Far Cry 6. The change also requires increasing its memory bus from 320-bit to 384-bit, meaning the card will benefit from a bandwidth boost, although it’ll still feature the same memory speeds as its predecessor.

Essentially, it looks like the entirety of Nvidia’s Ampere lineup might get rebooted, but this new round of rumours could be based on the company exploring potential GPU configurations, rather than plans to implement them in future graphics cards. So, just like with all rumours, it’s best to take all of this with a hearty grain of salt. That said, Videocardz’ reports also state that Nvidia’s board partners have been instructed to prepare for the refresh, so perhaps most of these configs will be confirmed at CES 2022.