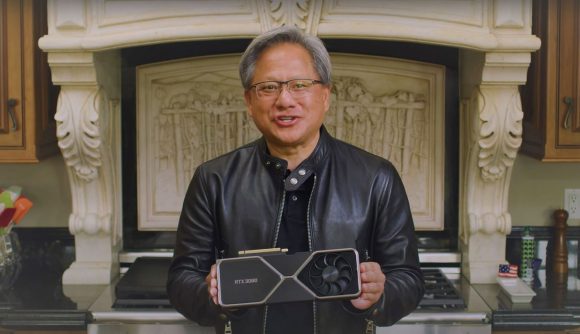 Details surrounding Nvidia’s rumoured RTX 3000 Super series are beginning to rear their head, with Kopite7kimi rounding up what we can expect from the iterative line-up. This includes specs and SKUs for the RTX 3060 Super, RTX 3070 Super, RTX 3080 Super, and perhaps more curiously, an RTX 3090 Super.

According to Kopite, RTX 3080 Super will come equipped with 8,960 CUDA cores, but fails to address whether or not the card will feature Nvidia’s rumoured Ampere GA103 GPU. The card also reportedly comes with 12GB of GDDR6X memory, bearing an uncanny resemblance to the RTX 3080 Ti. Additionally, RTX 3070 Super revision will apparently include a G6X memory upgrade, while the RTX 3060 Super has 5,632 CUDA cores – 786 more than the RTX 3060 Ti.

Kopite’s insider info covers Nvidia’s potential plans for the RTX 3090 refresh, but the leaker doesn’t seem too convinced about the card’s Super label. Such doubts suggest that the GPU might use an entirely different branding to its RTX 3000 counterparts. While this could mean the company’s Titan tag is set for a comeback, it could equally make room for something new.

It’s worth mentioning that while Kopite is a reliable source, Nvidia has yet to announce its RTX 3000 Super plans. The insider has also cast some scepticism over some of the leak’s specs, meaning you should probably take the information with a grain of salt.

That said, the AMD Radeon RX 6600 now has an official launch date of October 13 this year, so Nvidia is probably gearing up for an announcement soon. A new HP Envy all-in-one gaming PC listing also specifically mentions Nvidia’s RTX 3080 Super, adding more fuel to the rumour pyre. Naturally, HP’s inclusion of the unannounced GPU could be a mere admin error, but it could also be a sign that the AIO machine will get an RTX 3080 Super upgrade in the future.