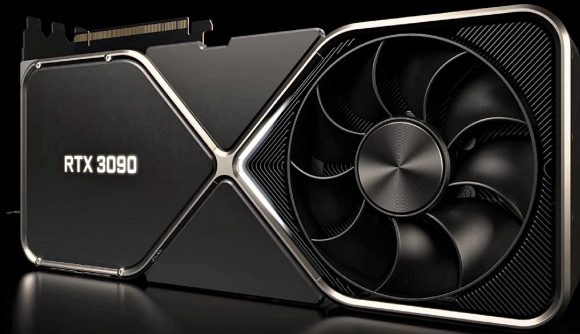 Nvidia’s flagship Geforce graphics card is something of a monster, but the rumour mill tells tales of an even more powerful RTX 3090 Ti with more CUDA cores and glutenous power requirements. Yet, it looks like this GPU could boast more than just performance brawn, as the new card could also feature Micron’s fastest GDDR6X memory.

According to Uniko’s Hardware, the RTX 3090 Ti will come with Micron’s MT61K512M32KPA-21U memory on board, a configuration that features 21Gbps bandwidth. The GPU will also be the first to use 2GB GDDR6X modules, reducing the original RTX 3090’s number of chips by half.

Simplifying the original Nvidia card’s memory configuration naturally comes with benefits, as it negates the need for an actively cooled backplate. That said, the RTX 3090 Ti’s new power connector and rumoured 450W TDP could make additional cooling solutions a must, especially since it’s consuming even more power than the green team’s current frontrunner.

Just like with all gaming PC rumours, we’d suggest taking this newfound RTX 3090 Ti information with a grain of salt. However, providing the details are true, we could see the Nvidia card break the 1TB/s brandwidth threshold for the first time in the manufacturer’s history.

The RTX 3090 Ti will undoubtedly be one of the best graphics cards, but ongoing component shortages could compromise the card’s suspected January 2022 launch. The same applies to the company’s refreshed RTX 3070 and RTX 3080 GPUs, but prices above and beyond MSRP could make the latter a more viable option for those looking to revamp their rig next year.