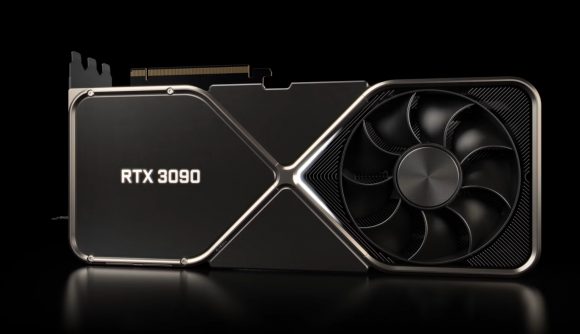 It seems Nvidia can’t let go of its Ti branding despite recent reports that the company is working on new RTX 3000 Super GPUs. Videocardz has received details that have supposedly been shared with board partners, revealing the previously rumoured RTX 3090 Super will instead be an RTX 3090 Ti. This change reportedly comes with more than just a name, with additions to its core counts and a new power connector.

The RTX 3090 Ti reportedly has a TDP of up to 450W, a 100W increase over the current RTX 3090. More interesting than that, however, is that this new GPU may feature an all-new power connector which will become standard for PCIe Gen5. Unfortunately, there’s no information confirming whether the card itself will have a PCIe Gen5 interface.

Nvidia’s new and improved flagship GPU will also feature 10,752 CUDA cores, 256 more than the current RTX 3090, and 2 additional RT cores. There’s no way to translate these specification changes into real-world performance improvements. However, it’s a given that the RTX 3090 Ti will be one of the best graphics cards available, provided the ongoing chip shortage doesn’t continue to stifle availability.

You should be able to get this goliath of a pixel pusher in your gaming PC sometime in January 2022, where it will allegedly launch alongside the RTX 2060 12GB and RTX 3070 Ti 16GB graphics cards. Failing that, you could wait for Nvidia’s RTX 4000 or AMD’s RDNA 3 GPUs which are both rumoured to launch sometime in 2022.