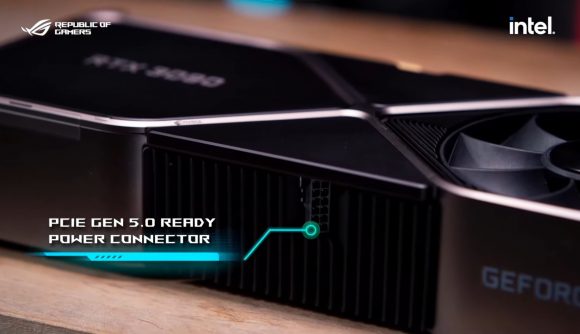 It’s time to bid farewell to the cumbersome six-pin and eight-pin power connectors we’ve used to power the graphics cards in our gaming PCs for what seems like forever. Asus has confirmed that PCIe Gen5 will usher in a new 12-pin connector, which should provide all the juice the best graphics cards need for the foreseeable future while being decidedly more compact.

In its recent ‘Break All Limits’ global launch event for new ROG branded products (which you can watch here), the company dished out a bunch of details on its Alder Lake Z690 motherboards, Strix gaming monitors, a Delta S Animate gaming headset, and a refresh of its Thor power supplies.

Every new ROG Thor PSU will ship with PCIe Gen 5 power connectors, which will help prepare for the rumoured Nvidia RTX 3090 Ti and all future graphics cards that will inevitably use this design. Don’t fret about the new Thor power supplies being incompatible with your current GPU, as they’ll also ship with the current standard six-pin and eight-pin connectors.

While it’s likely that other manufacturers will ship out modular or semi-modular PSUs with the new PCIe Gen 5 power connector, Asus doesn’t appear content to release new products without cutting-edge features. Prior to their official launch, it was revealed that some Asus Z690 motherboards will feature a new ‘PCIe Slot Q-release’ button, which should be a godsend to anyone with a bulky GPU.

In order to make use of PCIe Gen 5, you’ll need one of the best gaming CPUs that supports it. Thankfully, Intel just revealed its Alder Lake processor lineup, which not only supports the new standard but also supports DDR5 gaming RAM. Pre-orders are currently live, but you’ll need to be quick as the ongoing semi-conductor shortage will likely lead to limited availability.