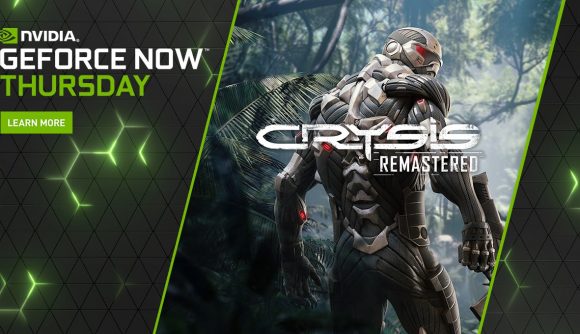 If you’ve ever built your own gaming PC, the question “can it run Crysis?” has likely haunted you throughout the process. However, with the Crysis Remastered Trilogy’s arrival on Geforce Now, you won’t need the best graphics card to run the high-fidelity FPS, and Nvidia is even giving away copies of Crytek’s classic with their priority cloud gaming service subscriptions.

Nvidia announced today that existing priority GeForce Now members will receive a free Epic Game Store code for Crysis Remastered in the coming days, while those that have pre-ordered an RTX 3080 membership can grab the game once subscriptions are active. If you’ve got a GeForce Now Founders membership, you can also upgrade your existing membership and enjoy RTX 3080 performance without losing your early bird benefits.

The Crysis Remastered Trilogy isn’t as difficult to run as the original series, but Nvidia says its GeForce Now inclusion means it’ll even run on a “10-year-old Mac or PC”. In fact, if the green team’s GeForce Now phone box ever pops up again, you could even grab a shot of the shooter in the middle of a real-world concrete jungle.

Graphically intense shooters aren’t for everyone, so if Crysis Remastered isn’t your jam, you might want to check out the other games heading to GeForce Now this month:

GeForce Now could make for a compelling alternative while we endure ongoing graphics card and component shortages. However, not everyone is willing to convert to the cloud just yet, and the arrival of an RTX 3080 refresh with more VRAM could give PC gamers a chance to experience Nvidia’s next-gen GPU tech first-hand.

Take the Crysis Remastered system requirements test over on PCGameBenchmark to answer the question… Can I run Crysis?