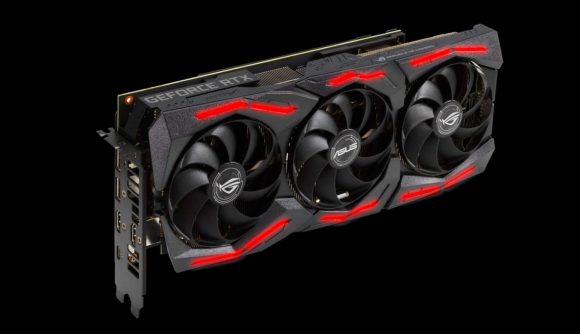 It looks like Asus is planning on updating the Nvidia RTX 2060 with a full 8GB of 14Gbps GDDR6 video memory. That will push it further ahead of the latest Radeon, the AMD RX 5600 XT, and could even potentially put it on par with the AMD RX 5700. It’s possible that this is coming directly from Nvidia, and there will be 8GB versions of the RTX 2060 coming from all of the green team’s graphics card partners, but so far we’ve only seen details of three different Asus Republic of Gamer cards.

The recent release of the Doom Eternal system requirements have also hinted at an upcoming Nvidia RTX 2060 with 8GB of video memory. They list an RTX 2060 (8GB) as a recommended GPU for 60fps at 1440p, though that could simply mean an RTX 2060 Super. This tenuous link is even more likely down to a little copy-editing mistake than the EEC registration we’ve seen from Asus.

But haven’t we already got RTX 2060 cards with 8GB? Kinda. The Nvidia RTX 2060 Super is essentially an RTX 2070 Lite, with the same GPU, a few CUDA cores lopped off, and the same memory setup. The OG RTX 2060 came with just 6GB of GDDR6 and there were never higher-spec versions released by any of the AIBs that I can think of.

So this would be a new kind of old-school RTX 2060, potentially giving the otherwise underused TU106 GPUs a new lease on life, especially if the 8GB cards can come in at the same price as the original 6GB versions. Though given that the only ones we’ve seen so far have been the Asus ROG options that’s probably unlikely… the ROG Strix cards always carry a pretty hefty price premium.

The new versions of the RTX 2060 8GB have popped up in a new EEC listing posted to the database by Asus yesterday. It lists three different cards, all variations on the same ROG Strix RTX 2060 EVO theme. One is the standard EVO 8GB card, the next is a slightly overclocked EVO 8GB Advanced Edition, and the last one the full-fat EVO 8GB OC edition. 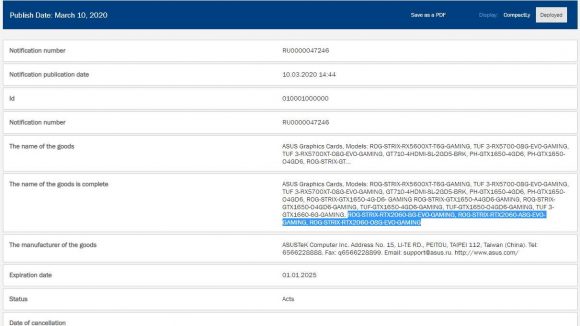 There is always the possibility that this isn’t a new card, that someone at Asus has just listed the old RTX 2060 Super card codes and missed out the tell-tale ‘S’ after the RTX2060 bit, but I’m not convinced. It would be odd to issue another registration notice of long-released cards.

So, where would these new 8GB cards sit? At the moment, thanks to our graphics card comparison charts, you can see that the current RTX 2060 sits in between the RX 5600 XT and the RX 5700. With a bit of a memory upgrade you could see the newer edition pulling alongside the higher spec AMD Navi card and leaving the other in its wake.

Or it could simply be a cheap way of making the RTX 2060 numerically superior to the RX 5600 XT on retailer listings, and on par with the RX 5700. Forget actual gaming performance, marketing is where it’s at, right?