It looks like Nvidia has taken the smart step of renaming the GTX 1650 Ti that was planned in for an October launch this year. That’s one of the takeaways from Gigabyte’s latest graphics card SKU listing submitted to the EEC database today. The other obviously being that there are some AMD RX 5500 and RX 5500 XT GPUs coming our way soon.

In the registration doc Gigabyte lists approximately one hundred thousand different graphics card SKUs for its AMD and Nvidia lineups. I’m not sure on the exact number as it’s difficult to count all that constricted text, but it’s a ballpark figure. Anyways, aside from listing new AMD RX 5700-series and RX 5500-series GPUs Gigabyte also note a new RTX 2080 Ti card, a couple of white RTX 2080 Super and RTX 2060 cards, and a whole host of GTX 1660 Super GPUs too.

The Nvidia GTX 1660 Super is set for launch on October 29, potentially a week after the oft-rumoured GTX 1650 Ti… though the odd thing is that there’s no mention at all of the Ti card. There is, however, mention of a load of GTX 1650 Super cards…

The original GTX 1650 Ti name made complete sense. There is, after all, already a GTX 1650, and introducing a ‘Ti’ version is something that Nvidia has regularly done in the past. But then came all the ‘Super’ stuff with the updated RTX Turing cards earlier this year, and with Nvidia aiming to squeeze a new card in between the GTX 1660 and GTX 1660 Ti it needs another suffix to use.

And releasing both a GTX 1650 Ti and a GTX 1660 Super card within a week of each other looks a little messy and potentially a bit confusing too. So the naming scheme switcharoo of instead launching a GTX 1650 Super and GTX 1660 Super makes a whole lot more sense.

It’s just much cleaner and more sensible really, and if there’s something we desperately need in component nomenclature its sensible and clean naming schemes… 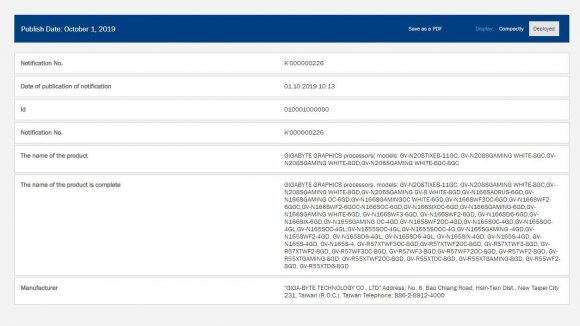 The GTX 1650 Super, as it looks like it’s now known, is reportedly due for launch on October 22 this year, and is expected to sport a more powerful Turing GPU than the straight GTX 1650 card. The expectation is that Nvidia is introducing it to combat the highly anticipated AMD RX 5500-series GPUs also thought to be launching in October.