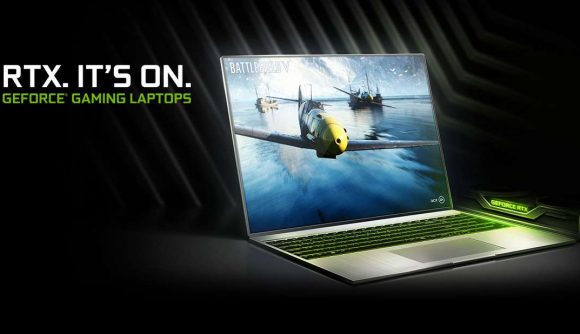 RTX. It’s on. And it’s being plumbed into more than 40 different gaming laptops, in over 100 different configurations starting on January 29. Yes, Nvidia has announced mobile GeForce RTX 20-series graphics silicon for gaming laptops at its Sunday night CES press conference.

With RTX 2080, RTX 2070, and RTX 2060 versions of its Turing GPU architecture going into the next generation of gaming notebooks there is a whole lot of graphics power going mobile around the end of this month. Like the Pascal generation before it, the 20-series Turing cards will filter down into mobile form using the same basic core configuration as their desktop counterparts.

But don’t let that fool you, these mobile GPUs aren’t going to be able to deliver quite the same level of gaming performance as their desk-bound siblings. The top two chips, the RTX 2080 and RTX 2070, are coming in Max Q configurations in systems such as the new Razer Blade 15, which means they’ll dynamically manage the power used by the GPU to fit inside sleek mobile chassis. That means cutting performance by around 10% compared with a full-fat GPU, but Nvidia is still claiming the RTX 2080 laptop chip will be faster than a GTX 1080 desktop graphics card, and 40% more efficient too.

That’s quite a bold claim considering the TU104 GPU is far larger than the GP104, but by offering laptops capable of playing Battlefield 5 at ultra settings, with the top level of ray tracing and DLSS, it’s going to be exciting to see what this new generation of gaming notebooks can bring to the table. These will be some of the fastest gaming laptops ever released, delivering some of the best experiences in some incredible form factors.

Read more: Check out the best gaming mouse around today

It’s not just performance that has been pushed forward with these new designs either, Nvidia is promising that they’ll be thinner and lighter too. Taking the upcoming RTX 2080-powered MSI GS65 Stealth as an example, Nvidia states that it is 15% lighter, and 10% smaller than the thinnest GTX 1080 laptop, the Asus GX501. 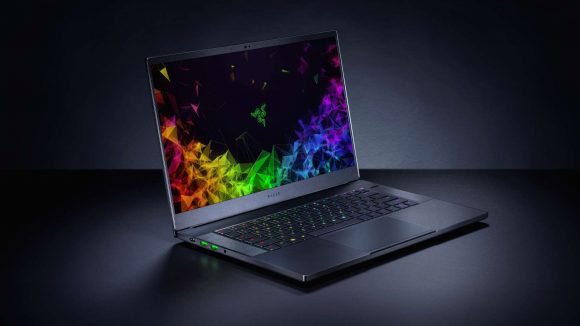 You might have to manage your ray tracing expectations a touch with these mobile RTX GPUs, however. While their desktop counterparts offer the pinnacle of the current ray tracing-capable hardware, the notebook designs offer considerably weaker DXR support. 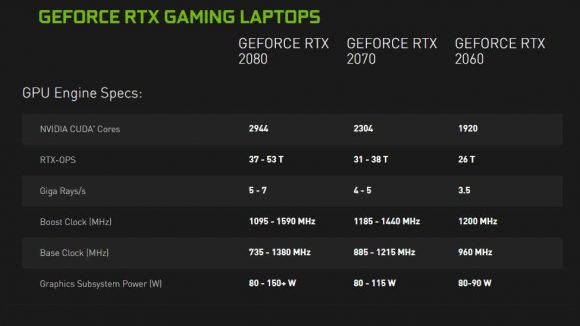 Given that Nvidia has told us that the minimum for a good ray tracing experience is 5 Giga Rays per second that means the RTX 2070 and RTX 2060 laptops might well struggle to deliver on the full RTX promise. Though, it has to be said, the addition of DLSS support to the ray tracing pot might help mitigate that potential DXR problem.

The full range of RTX-enabled laptops will arrive at the end of this month, with availability starting on January 29.