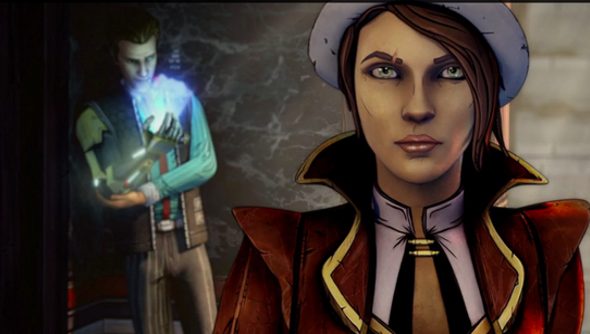 Telltale making an adventure game out of the Borderlands IP was born out of the studio and Gearbox bonding over cocktails at last year’s Spike TV awards, Telltale senior VP Steve Allison tells Polygon. “We were backstage at the [2012] Spike VGAs, and Gearbox was sitting at table one and we were sitting at table two — we were there for The Walking Dead. We got to talking a little bit, and I don’t remember when in the night it became, ‘we should do this thing,’ but it happened over a few cocktails.”

What could have just been two developers contemplating a “what if?” scenario over drunks stuck with Telltale, and the studio eventually approached Gearbox with a pitch. The adventure game vets believed that Borderlands had a lot of story potential and great characters, but that they could do something a bit different with the universe.

Although Telltale is no stranger to making adventures out of other IPs, most recently taking on the Fables comic series in The Wolf Among Us and previously putting their own spin on The Walking Dead – and less successfully – Jurassic Park and Back to the Future. But, according to Allison, doing what they’ve done with TV, film and comic IPs with a big game franchise has always been a dream.

While Borderlands via Telltale is an interesting prospect, I confess to be much more interested in what they’ll be doing with the Game of Thrones property, especially since it seems like such a good fit, what with the developer’s penchant for making players juggle with relationships, a cornerstone of George RR Martin’s fantasy series and the subsequent HBO show.

Since it’s HBO they made a deal with, the episodic title will be closer linked to the TV series rather than the original books, Allison reveals. “Creatively, we’re going to defer to the show because we are using HBO’s license,” Allison said. “Playing the game should feel like watching the show and we’ll be making lots of decisions the same way the showrunners do. We’ve talked with them about how they make their decisions and how they pace their scenes, what they do when they face a big plotline and what to keep and cut. We’re taking their expertise and applying it to the material we bring to the table.”

Obviously this won’t make it all that different from the tome-like novels, as HBO’s version is authentic, even if it doesn’t follow the source material to the letter. If anything, it will be convenient, giving Telltale more context for how they present characters and Westeros physically, using places and people we already recognise from the show.

With Season 2 of The Walking Dead kicking off alongside The Wolf Among Us, that makes four projects, and Allison notes that this number is about what they want to keep it at every year. Hopefully the episodic model will allow them to keep doing this without compromising on the quality of the titles.