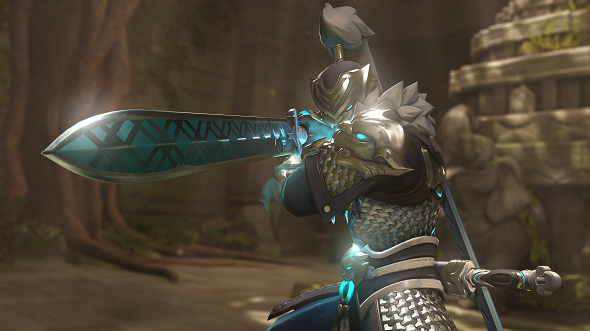 Overwatch is holding its Lunar New Year celebration through March 5, and the new event skins all are themed around Chinese tradition. As one redditor pointed out, Genji’s new skin in particular references ancient legends specifically.

Not into Overwatch? Here’s our list of the best multiplayer games on PC.

Genji’s event skin replaces his curved, stylized katana-style swords with straight, double-edged swords that look much more like traditional Chinese weapons, and they bear glowing characters on their blades. Redditor brokenarcher says these are the names of a legendary husband and wife blacksmith team from the Spring and Autumn period, which ran from approximately 771 to 476 BCE.

Genji’s longer, main sword is apparently named after Gan Jiang, a swordsmith who was once ordered to forge a blade for King Helü of Wu. According to legend, the swords, named after Gan Jiang and his swordsmith wife, Mo Ye, took three years to make, and Gan Jiang knew the emperor would have him killed for taking so long. When they were finished, Gan Jiang presented the king with the sword Mo Ye, hiding the sword that bore his own name with his wife who was pregnant with their son, Chi.

As the legend goes, brokenarcher explains, the king did have Gan Jiang beheaded, and sent assassins to kill Gan Jiang’s son after dreaming of a boy who would come for revenge. When one of the killers eventually caught up with him, Chi told him the story of his father. The assassin said he would avenge Gan Jiang if Chi gave him both his head and his father’s sword, and Chi obliged, killing himself and offering up the sword.

When the assassin brought Chi’s head back to the palace, he convinced the king that it should be boiled. But when the water wouldn’t get hot enough, the swordsman suggested that the king take a closer look. The assassin took that moment to sever the king’s head with Gan Jiang’s sword, avenging the family.

So while it isn’t the happiest of fables, it’s still fascinating for Blizzard to have made that connection – and next time someone playing Genji sends your bullets right back at you with his flashing sword, now you’ll at least know why it’s happening.