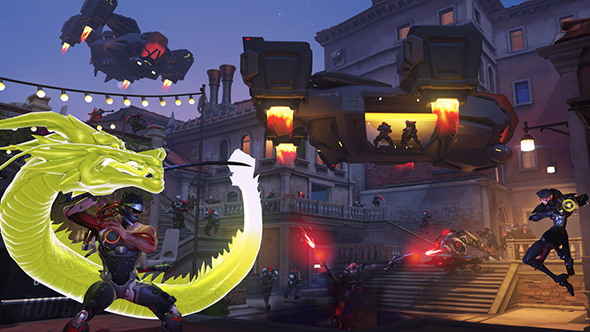 Overwatch has been supported for years through seasonal events that often introduce new game modes with unique objectives to keep things fresh. Those only rarely get integrated into the main game, and Blizzard seem to have settled into a steady annual rhythm for their regular events. But don’t worry – there are more new game modes on the way.

Check out all the skins and modes in Overwatch Archives Retribution.

Blizzard’s Aaron Keller says that those unique modes are born of a desire to see something new in Overwatch. “Capture the Flag for Lunar New Year was just something we always wanted to see in Overwatch, and you can see each year that sometimes the marquee game mode changes a little bit. The 2016 winter event had Mei’s Snowball Fight, and we included it with the most recent one, but we also had the Yeti hunt too. So there’s definitely other things that we’d like to try.

“We’ll probably always for the foreseeable future stick to events to introduce those game modes,” Keller says. “But yeah there’s definitely things we’d like to see in the game. Nothing I can really talk about, but yeah there will be new stuff.”

The current Overwatch event, Retribution, follows the same PvE formula as the previous Uprising event. But with new enemies, a new map, and new story it’s pretty much a whole new mode. Don’t expect many of those unique modes to become permanent, however.