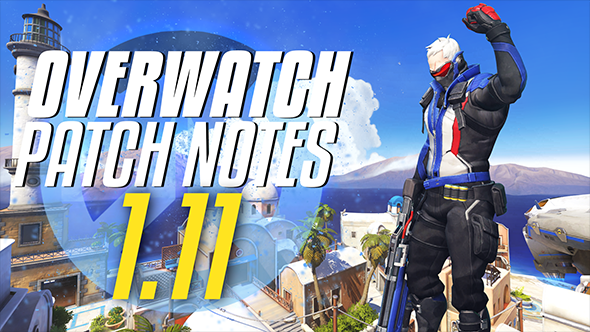 Patch 1.11 for Overwatch (console patch 2.13, we think, pad-fans) is here. It’s got nerfs and buffs, though nothing drastic, as well as a load of quality of life changes to both heroes and systems – rezzes in the kill feed, Mercy-killers rejoice! All the details below.

For what we know about the future of Overwatch, check our dedicated updates post.

Neither of those are particularly going to light the world on fire, though it does mean in extreme circumstances Genji can go a lil’ bit broken.

Much as the joke of the Hanzo main continues (which Kaplan himself can only aspire to be), the character is pretty weak. In line with Overwatch’s usual changes, this seems focused on making him more fun to play, while hoping that improves his standing in the tier list at the same time.

Developer comments:“To help Orisa maintain the front line for her team, we’re reducing the cooldown of her Protective Barrier. This change also helps her reposition the barrier more easily when needed. To compensate for this new defensive strength, we’re reducing her Fusion Driver’s damage, as it felt too high.”

For a tank, Orisa could put out some mad damage. However, her shield was not as useful as Reinhardt’s larger, hardier version. This is a step in that direction, though clearly Blizzard won’t want to totally switch her over.

More recently, Kaplan has said the damage changes are being reconsidered. That probably means a lighter nerf, rather than it being totally scrapped, but the changes are intended to be a “large buff” according to Geoff Goodman.

Developer comments:“Wraith Form is typically used as an escape ability after firing. This change gives Reaper a fighting chance if an enemy chases him down as he uses it.”

Not the largest buff in the world for another of the game’s least-used heroes, but it’s a quality of life change that will make play far less frustrating. Blizzard have said in the past they don’t want to make Wraith Form something you can cancel out of – the other obvious buff – so this is the change left to them.

More of a bug fix here, but doubtless expert Reins will have gotten used to the climbing power. It’s not like he doesn’t need to be brought down a peg though, so fair play.

Developer comments:“Soldier: 76 is in a much better place lately, but his damage output was making him a must pick, compared to similar roles.”

The only straight nerf in the patch, and not a humongous one, but one of the game’s best DPSers getting a tone down. Nobody is going to be unhappy about this.

The first of these has been promised for a while, the other is clearly a unique situation that wasn’t originally accounted for. While the custom game section isn’t used by the majority of the playerbase, it is an extremely useful tool – more stuff is good, surprise.

Along with whatever comes alongside the Anniversary event (skins, skins galore), there’s some extra items coming to default Overwatch loot boxes with this patch. A Tracer emote, Reaper’s shrug and sits / laughs for Orisa and Sombra are all in standard loot boxes.

The usual round of changes here, including making it easier to BM your opponents in POTGs. Hidden down here is also the note that Mercy rezzes, environmental kills, and assists are all now in the kill feed.

Another thing worth highlighting: the Symmetra invicible teleporter glitch will be fixed in patch 1.11, according to QA Lead Max Thompson.

There’s also this post of unlisted changes on Reddit. Some of them are in the above, as it was mostly compared to an early, leaked version of the patch notes found on BlizzTrack.

That’s it for Overwatch patch 1.11 – 1.12 should follow next month, by usual timing. We’ll update this post as Blizzard do.