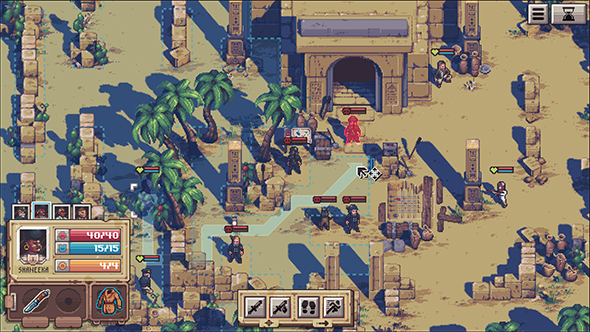 Chucklefish, the indie publishers who’ve put out titles like Risk of Rain and Stardew Valley, will now partner with German developers Robotality to release Pathway. Set just prior to WWII, it’s an Indiana Jones-style adventure that combines turn-based strategy and procedural generation, with a whole bunch of choosing-your-own-adventure in between.

Delightful titles from small developers abound with the best indie games for PC.

It’s 1936, and the Nazis are spreading across the world, searching for occult artifacts to aid in their bid for power. You’re seeking out a friend who went missing as a result, with unique, hand-crafted story adventures popping up across the procedurally generated map.

Each of the 16 companions you can recruit has their own equipment and skill trees, which you’ll use in turn-based “squad combat” that requires you to make careful use of cover and positioning.

The game’s vibrant look is built from a hybrid of pixels and voxels, giving the game 16-bit aesthetics with the added benefits of a dynamic lighting and shadow system.

Pathway is set to release mid-2018 for Windows, Mac, and Linux PCs. Robotality and Chucklefish previously partnered on a similar turn-based strategy RPG with an Alien-style setting in Halfway. Chucklefish is set to expand their in-house development this year with Advance Wars-like Wargroove, and the Harry Potter-meets-Stardew Valley whimsy of Spellbound.