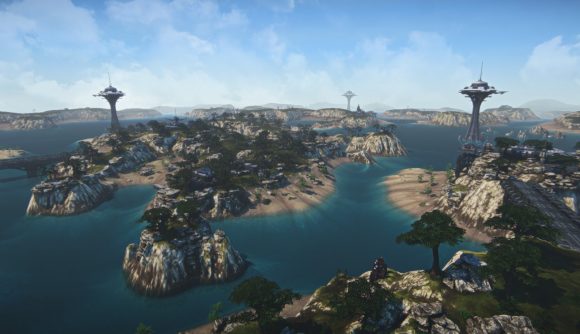 There’s a huge update out now for the free-to-play sci-fi multiplayer game PlanetSide 2, and it adds the first new continent the game has seen in almost eight years. As the name suggests, the Isles of Oshur are a dense archipelago of islands ripe for the taking, and there are some all-new game mechanics to take into account while before you join the battle there.

Developer Rogue Planet Games says there’s “something for everyone” on Oshur, which features not only countless sandy beaches, but also jungles and savannahs ripe for vehicular combat. It’s dotted by towering Trident relays, which can only be entered up top – meaning you’ll need to make sure you’ve got air support along with you.

The Isles of Oshur don’t have the traditional warpgates you typically find on PlanetSide 2 maps, and your new headquarters is located on new Exodus-class fleet carriers out on the water. You’re pretty safe while aboard: the carriers have particle projection cannons mounted on their decks that will shred any enemy vehicles that get close.

Speaking of water, however, the developers say they have “completely changed how water works in PlanetSide 2” with this update. Since there’s so much water in Oshur, every unit, vehicle, and weapon needed to be updated to account for this.

Wheeled vehicles can float on the water’s surface, while flying vehicles can swoop down and cruise underwater as submersibles. Hover vehicles, naturally, will coast over the top of the water, while infantry and tracked vehicles will plod along the floor below. Perhaps most importantly, any projectile that enters the water will experience significant drag.

The devs say PlanetSide 2’s existing maps will all gradually updated to reflect these new rules.

Most conventional weapons won’t work underwater, so you’ll want to unlock some of the new submarine weapons available in PlanetSide 2. There are three new rifles and one pistol, all designed for underwater use, that are can be unlocked by completing various challenges.

There are plenty more changes in the latest update, and the official patch notes have all the details.