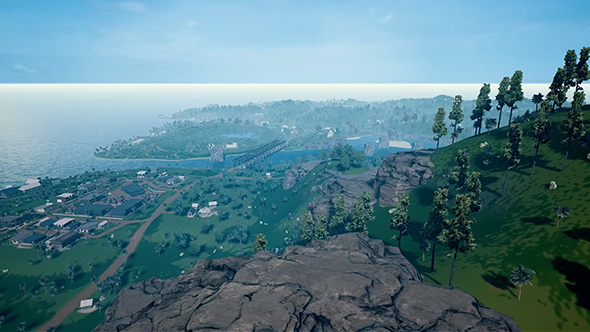 At a Game Developers Conference postmortem today, Brendan “PlayerUnknown” Greene showcased a few seconds of footage from the new, upcoming island map for PUBG. The video has surfaced in cleaner form as part of one year anniversary video from PUBG Corp., giving a broad overview of the layout and a few seconds of in-game action.

Here’s everything you need to know about the new PUBG maps.

You can see the footage starting at 1:42 in the video above. It definitely looks like a work in progress, with some missing textures and detail at points, but PUBG Corp. have said in the last development roadmap they want to get new maps into the public eye and players’ hands sooner for more feedback and testing.

Judging by the foliage and types of buildings, this map looks to have a Pacific island feel. We already knew it would be much smaller than previous maps at just 4x4km, which should lead to quicker matches and faster action.

Even with the 1.0 release out of the way, there’s plent more happening in PlayerUnknown’s Battlegrounds. A flare gun is on the way – which may be a handy tool for calling in supply drops – and a new set of time-limited Event Modes will help to change up the action.