As often as seasons change in battle royale games nowadays, PlayerUnknown’s Battlegrounds Season 8 is coming in like a bombshell. July 22 will see the new season kick off, but this won’t just be another map-focused trip through a survivor pass in search of new skins. Instead, there’s a newly remastered Sanhok map to explore, complete with some brand new mechanics that are set to shake up what you think you know about PUBG.

The most surprising new element coming when the Season 8 release date arrives is the loot truck, which PUBG Madison studio director Dave Curd says is like a ‘mobile care package.’

“It’s this ten tonnes of terror,” he says. “It’s this truck that’s just chock full of confiscated weapons from previous players. And if you take it out, there’s a king’s ransom in loot. There’s really enough [level] three gear to get a squad mostly suited up.”

The loot truck – armoured to the gills and fitted with a vicious-looking cowcatcher on its front – rumbles around the roads of Sanhok, even until the final circles, and that’s going to have a major impact on how players plan their routes through each match. Curd says it’s inspired by the ‘loot goblins’ found in games like Golden Axe and Diablo 3, giving players a target of opportunity to take down for a valuable prize: confiscated weapons, which come equipped with attachments and skins. But as ever, it’s a calculated risk-versus-reward proposition. You may be the type of player who wants to go straight for the prize, using the spike strip and panzerfaust to ambush it, or taking to the skies to tail it in a motoglider, a squadmate letting rip with an LMG from the passenger seat.

Alternatively, if you like to avoid care packages and the heat they bring, you might want to give the truck a wide berth. Or you might be the kind of player who hunts the other two kinds. In each case, the loot truck is going to figure into your plans. 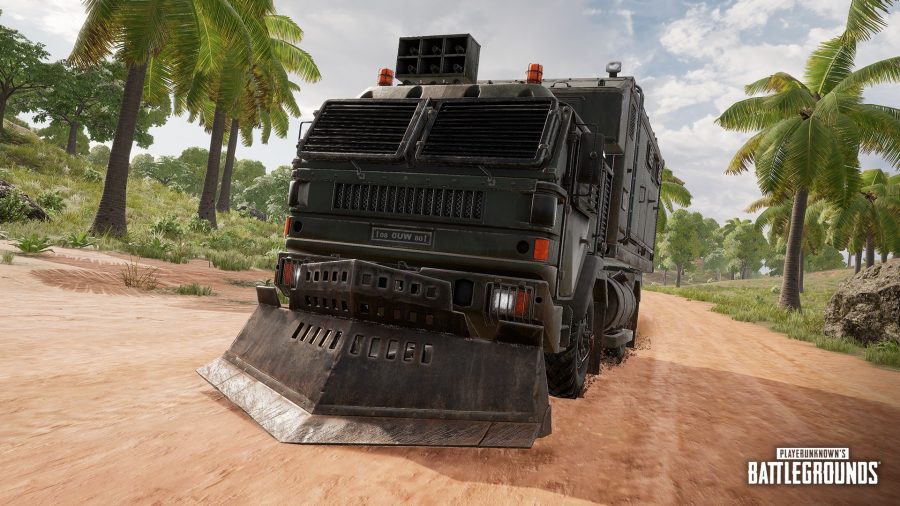 “I’ve seen players leveraging the sound it makes to cover their footsteps,” Curd says. “I really think it’s going to be interesting to see how our fans enjoy using it.”

We were all interested to explore that perversion of nature, something beautiful mutating into something else

Fans will have to re-learn Sanhok, which has gotten much more than a visual facelift. Several locations have been reworked to function better as part of a whole map rather than as isolated deathmatch sites, while others have been replaced entirely. Using countless thousands of hours’ worth of heatmap data, Curd and his team at PUBG Madison created new enticing locations to swap for some of Sanhok’s less popular sites.

By Curd’s estimates, some 40% of the map is new, whether it’s in the form of improved grass and texturing or completely changing the flow of town areas and rivers. The idea PUBG Madison has had on the wall as it’s worked has been to ‘keep the beats the same, but have the melody come out sweeter.’ “Our high-level mission statement was ‘Paradise Lost’ – what was once a thriving, touristy, farming community is now kind of war-torn, abandoned, overgrown,” Curd says. “That perversion of nature and something beautiful mutating into something else – that was really something we were all interested in exploring as artists and designers.”

Sanhok’s changes this season reflect a vast amount of longitudinal data gathered over what is now more than a billion hours of player time spent on the map. Fights that have taken place on the mountain in the northwest corner tended to strongly favour whoever held the high ground, and PUBG Madison’s design team has carved out new approaches into its sheer cliffs and provided more cover and concealment for attackers. Players have felt that the rivers have been far too dangerous to attempt to cross, and so they’ve been made shallower and narrower while still allowing an Aquarail to travel its full length.

Boot camp has been reworked, with the buildings now arranged along a diagonal from the bridge to the north to the access road to the south, with more cover and new underground areas to provide more interesting engagements. Quarry has had a massive face lift, its old sandstone pillars replaced with jagged formations that have clearly been mined. Coconut Farm up in the island’s northeast corner is now Airfield, a small airstrip where you’ll always be able to find a couple of gliders.

“Down in the southwest, we used to have Docks,” Curd explains. “Again, the data suggest it’s just not getting the love, and we think it’s just so far from the center, and savvy players typically drop center. So we absolutely wiped it off the face of the earth and replaced it with this really tacky, scummy tourist town called Getaway.” 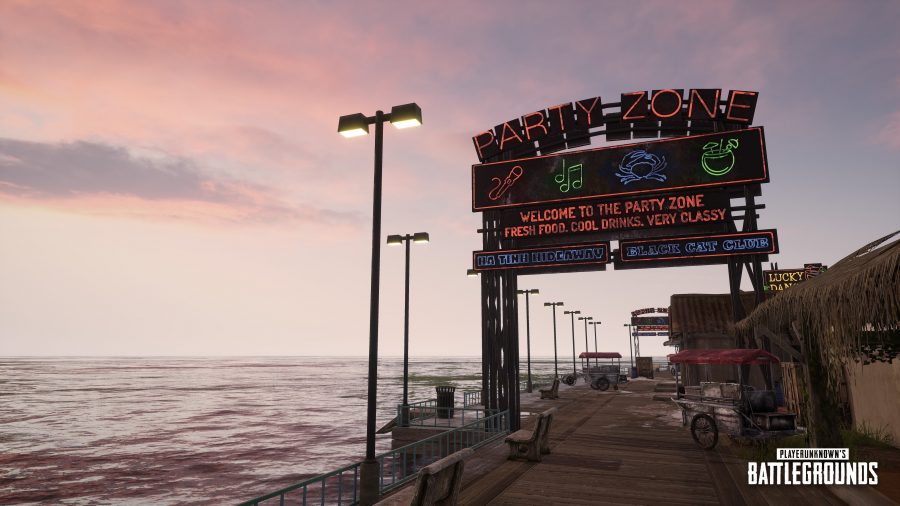 Getaway’s exactly the kind of questionable pit you might expect, with neon signs inviting revelers out to party, a place called Ashley’s Black Cat club, cabanas, and what was once a bustling boardwalk.

Out west, Ruins has gotten a complete overhaul. “It was such a nightmare for players to get a successful fight in Ruins, but then to be able to get out alive, because they were able to be harassed by outside players,” Curd says. “So we’ve totally redone the Ruins to be this four-way symmetrical compound. It’s got enough loot to support three to four squads dropping and trying to become the king of the compound.”

Surrounded by massive stone walls now, Ruins is a place set apart in Sanhok – you’re either in or you’re out. It’s become the Thunderdome, essentially. “You have to be the best fighter in the arena of new Ruins, and then you’ve got all the gear you need, all the weapons you need.” But only if you make it out alive, of course.

The changes have all been part of an effort by PUBG Madison to make Sanhok feel more like a contiguous experience that flows over the course of a full match, rather than the deathmatch arenas scattered around a wilderness that it began as, Curd says. The changes are also geared toward helping tell more of PUBG’s story, and players have plenty of new clues to look forward to over the course of season eight. Curd says things like the new loot truck will pull the curtain back a bit further to reveal more about who’s really running the games, and why you’re competing in them.

“We’re referencing things like the Lost bunker, or, you know in Portal, where you first kind of get beyond the test, and what kind of a great feeling that is,” Curd says, growing enthusiastic. “You really kind of start to see the supply lines and logistics of how these battle royale games are stocked. What happens to the guns of all the guys that die, what happens to the bodies of the players that didn’t make it?” And rather than dropping all the background lore at the beginning of the season for players to discover, Curd says this time around there’s going to be a steady trickle of new information over the course of the season.

Pressed on what form that might take, Curd demurs. “It’s really interesting, but I gotta just say stick around… We’re working more as a super unit now on the seasons, and the stuff they’ve got in store is just out of control.”

The ambition of PUBG’s next season becomes even more remarkable when one considers the fact that PUBG Madison, like the most of the rest of the games industry, has been working from home to help contain the spread of covid-19. With headquarters in Seoul, PUBG was among the first game development companies to work from home. “In some ways, this distance has forced us to be more innovative,” Curd says. “It’s kind of amazing that you can make big videogames from home, you know? Five years ago, I don’t think it was possible.”

Curd says he’s eager to get the team back together in the studio’s offices when it’s safe to do so – “I think there’s great organic discovery that happens in a casual conversation setting” – but he’s infectiously proud of what the 16-member studio has accomplished during this period of remote work and isolation. “This map is always going to be a reminder that these guys made it happen,” he says. “I’m gonna be forever proud of the team for delivering this season.”

We’ll find out what they have in store on July 22.