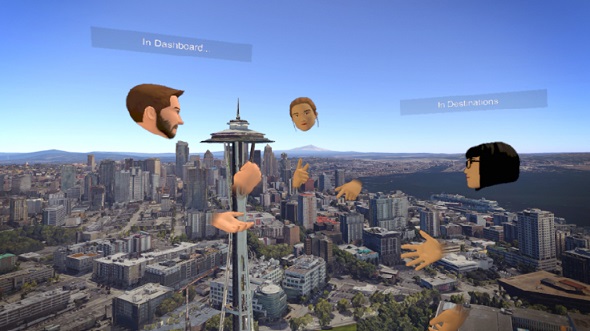 One big disadvantage to VR is that its all-encompassing experience tends to isolate you from everything and everyone else while you’re using it. Pluto, now available in Early Access on Steam, hopes to fill this gap by letting you “hang out” with friends while you’re in a VR experience.

Looking for something immersive to play? Here are the best VR games out on PC.

Unlike existing chat apps like VRChat, Pluto works as an overlay that can run in the background behind whatever other VR app you’re using. You can pop it up to answer and place calls in the middle of a Fallout VR session, or while you’re using TiltBrush or Google Maps, as the demo video above shows.

It also allows you to create an avatar, and during calls this will mimic the hand motions you’re making – replicating at least some of the entertainment value that comes from watching someone else use a VR headset.

There’s something that seems slightly Lawnmower Man-esque about talking to a floating polygonal head and hands while you’re bumbling around in VR, but fortunately Pluto lets you adjust all these features, or turn them off, as you see fit.

The app is free on Steam and available in its early access version now. Tip of the hat to Upload for reporting on this.