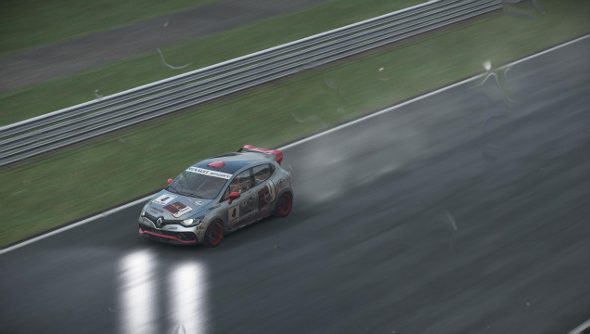 The standards for racing sims are incredibly high. There’s no shortage of choices for PC racers who want to take a supercar around Spa, or drive a LeMans Prototype car through the night at Circuit de la Sarthe.

Slightly Mad’s Project CARS’ sheer ambition distinguishes it enough from its rivals to give it a reasonable shot at topping the field as one of the best PC racing games, but in the racing genre, execution is everything.

Consider the perfect qualifying lap. In a sense, it begins with the previous lap: you make the right exit onto the main straight and cross the start / finish line with as much speed as your car can carry. From there, it’s a matter of putting together everything you’ve learned. Where did you leave a little speed the last time around? What angle did you misjudge, where could you have braked a little deeper, or a little harder? You’ve figured out the best that you can do with the machine you’ve got, and now you have to execute on that knowledge.

The perfect qualifying lap doesn’t look all that different from the ones that have come before it. It doesn’t even feel that much faster. But then you cross the finish line and the time flashes, and all that matters is whether or not you found those few tenths-of-a-second that nobody else could. It’s a marginal, almost meaningless difference. It makes all the difference.

Project CARS has a similar task. There are no revolutions to be had in the racing sim genre right now. There’s only a series of small, meaningful improvements that have to be made correctly if they are to lift Project CARS above its capable competition.

And maybe that, in itself, represents something of a disappointment. Project CARS at times looked like the PC’s all-in-one racing sim, something to stand toe-to-toe with the the console-specific Forza and Gran Turismo series. It would let you live the sim-racing career of your dreams, like in the Codemasters games, but it would have the high-fidelity authenticity of SimBin’s GTR and RACE series. Every great thing about other racing games would find its way into Project CARS crowdfunded automotive utopia!

The irony, of course, is that Project CARS does deliver on a lot of its earlier promises. It’s just that it all adds up to things we’ve seen before. This time, they’re done a bit better, or at least differently and with far prettier graphics. But Project CARS still feels like a game of disparate parts housed inside an unfinished body. 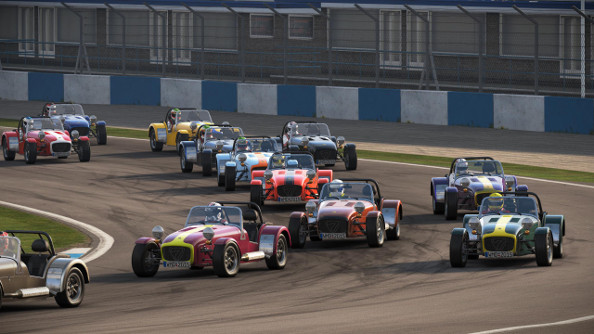 Where it matters the most — behind the wheel — Project CARS is an outstanding racing game. I said in my preview that it’s several different games in one, and that remains true. Just today, I started out driving a creaky ‘72 Ford Escort around Brands Hatch, coaxing its rolling body and absurdly narrow wheels through fast sweepers and trying not to let the the differential throw me off the road on corner exits.

A half-hour later I was rocketing around Oulton Park (Project CARS features a great list of race tracks from around the world, but it lavishes special attention on the UK’s amazing collection of circuits) in a Caterham 7 roadster, hammering over curbs and subjecting it to blasts of hard braking and acceleration. An hour after that, I was in ninth place behind the wheel of a BMW M1 Procar, a fantastic vintage racer with rock-steady handling …until a rainstorm closed over the track. Lap by lap, I was struggling more to maintain my pace on the fast-slickening circuit. Cars vanished behind fantails of spray, brake lights shimmered and danced through the rain-streaked windscreen, and my headlights revealed a deadly expanse of standing water and soaked curves while the drivers behind me closed-in. These events didn’t just feel like they involved different cars, but almost like they took place in completely different games. 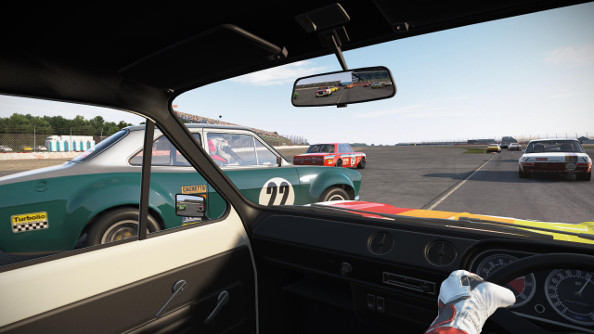 This is the most important thing to understand about Project CARS as opposed to other racing games: the driving is always its own reward. That scary old Escort isn’t a hurdle you have to clear before you get something better. It’s a completely different challenge, a completely different sort of fun (or agony) than what you’ll get with a Mercedes SLS or a McLaren F1. You may be a master of driving a LeMans Prototype around Spa, but driving an open-wheel formula racer is something completely different. How you brake, how you attack turns, and how you overtake changes drastically depending on what you’re driving.

That variety of vehicles and experiences makes Project CARS quite special, even if some of the vehicles don’t feel as carefully modeled as others. Karting is fun but, ironically, never feels as closely connected with the track as other forms of racing. The karts feel slippery and weightless, and driving them felt weirdly detached from things like grip and skid. The Porsche-derived Ruf CTR3 is also strangely undriveable, with a hellish understeer that I was helpless to correct. But those duds are more than offset by unexpected gems like The BMW M1 or the vintage touring cars. 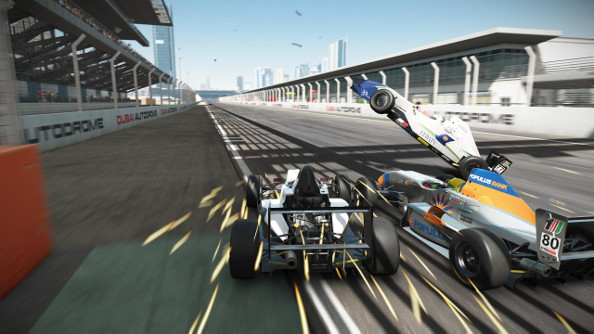 But Project CARS doesn’t play to its strengths consistently. It’s not a game about unlocks or career progression… and yet the only way to experience different racing series is to play a career mode. You can start your career in any motorsports series but, once you’ve committed to one, you’re stuck driving in that series until you get a contract offer to compete in another. It’s a strange decision: why not just let me run concurrent seasons of different competitions?

The career mode itself is deeply lackluster, not much developed from what I saw in my preview. It’s the same people on fake-Twitter talking up your performance, the same boring emails from make-believe team owners and engineers who have nothing of substance to tell you. It’s a poor imitation of the kind of thing Codemasters have done much better. The frustrations are relieved somewhat by invitational events that let you engage in mini-seasons that don’t require a contract for a new motorsport, and some of them turned out to be among my favorite races of the whole game.

Except that even on track, there are things that just don’t work very well. The AI drivers are way too stupid and dangerous: if one has run off the circuit, it will come lunging back onto the track at full speed and smash into anything in the way. Likewise, they will hold to the racing line regardless of who or what is around them. Going side-by-side into a corner is often risky in real-life motorsports, but in Project CARS it’s a guaranteed crash. It’s an AI that I am scared to race, as if every car on the grid were driven by Pastor Maldonado. 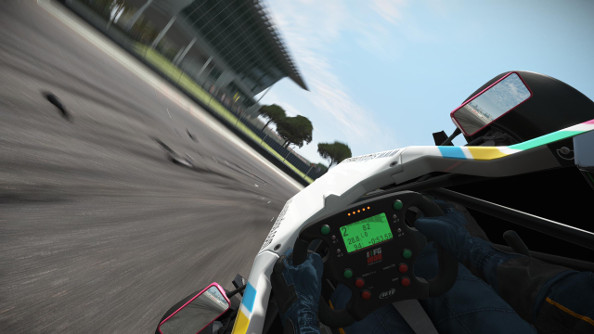 There are other places where Project CARS just doesn’t feel entirely finished. When you go do tweak your car setup, the game tells you that you can troubleshoot issues by asking your race engineer. Yet that feature doesn’t seem to exist. Fortunately, Project CARS does include a handy crib sheet to help you figure out what things like Fast Bump and Slow Bump do and makes car setup as easy and empowering as it’s ever been… and then shoots itself in the foot by forcing you to save only a single setup for a single car on a single race course. So if you’re trying to compare two different setups, or run a “wet weather” setup, you’re out of luck. It’s back to the drawing board, or filling a notebook with setup information.

Even stranger: sometimes the game randomly changes your car setup in ways I don’t understand. I save my setup, take the car onto the track, and then somehow my gear ratios are all screwed up so that first and second gears are identical, and so are fourth and fifth. So then it’s back to the garage to hope that this time the game will accept the settings I wanted. 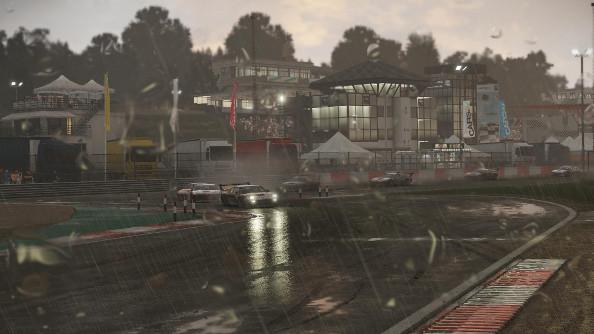 I feel bad dwelling on these issues, because they comprise such a small fraction of what Project CARS is. Yet they make it harder to enjoy the 90% of the game that is one of the best racing games on PC, and perhaps the best multi-format racing game since SimBin’s RACE 07 and GTR Evo.

At its best, Project CARS is a celebration of high-performance driving in all its incarnations. It follows the thread that runs through motorsport, from young hopefuls on karts to Formula 1 champions. It’s about listening to each vehicle and understanding what it is telling you, and respecting their differences. It’s about adapting to the unexpected, as the sun sets and the storms close in, and you find yourself staring unblinking through a rain-streaked windshield at the lightning-split darkness, just trying to survive the next few minutes until you get to the pits.

But to enjoy that game, you have to forgive incomplete or poorly implemented features, and make your peace with the evil AI. They’re small problems, in the scheme of things, and they don’t spoil a great drive. But they’re just enough to deny Project CARS what could have been a clean pole position.