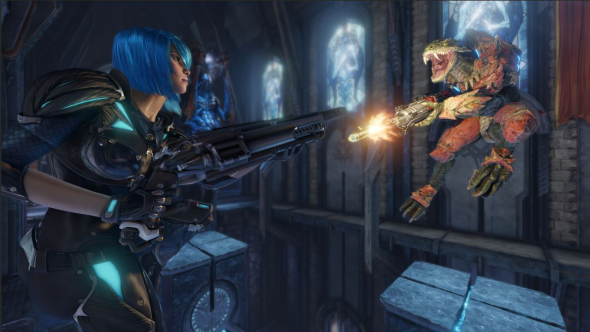 It can be a bit of a shock to see how much first-person shooters have slowed down overall since the heady days of the original Quake in the 1990s. Id Software is working on adding bots to Quake Champions, which will help ease the process of learning how to play a very frantic, jumpy game for new players. And there’s a new gore model they’re working on, too.

Looking for some new shooting action? Check out our list of the best FPS games for the PC.

The addition of bots is definitely exciting, because it’ll create a less stressful environment to learn Quake Champions’ levels and weapons.

Dean says the bots will be able to pull off some pretty advanced moves on harder difficulties, but you’ll be able to scale their expertise back to the point where they’ll avoid picking up powerful items and rely less on jumping to dodge incoming fire.

That means they’ll be easier prey for players who want to check out the new gore system id are rolling into the game soon. The tweet below includes a little trailer that shows it both in development and in the field.

It’s appropriately Quake-y: each character model will apparently be split into dozens of component parts on a gib, with feet, heads, and countless little cyborg bits and bobs flinging outward from the point of impact and bouncing off of walls and floors. One hesitates to imagine the process they used for recording the accompanying sound effects.

Quake Champions is still in Early Access, and you can buy in now via Steam, although bear in mind that once the game officially launches it’ll be free to play.