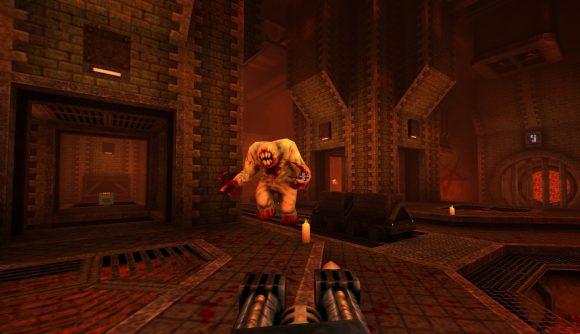 Classic FPS game Quake is now 25 years old, but it just got a brand new mode, courtesy of the folks who’ve been in charge of keeping the Wolfenstein series fresh these past several years. That’s right: there’s now an official horde mode in the original Quake, and the gang at MachineGames has even thrown in a classic mod as well.

First, though, horde mode. You can find it in the multiplayer menu in the Steam version of Quake now. Just select ‘change settings’ once you’ve chosen local or online multiplayer, pick ‘horde,’ and then choose the number of bots you want, the difficulty, and the map you want to play on.

There are four maps, each with their own distinctive looks and gear selections. You’ll blast away at waves of classic Quake monsters, and downing some of the big ones will spawn a silver key, which usually lets you into a room with some powerful gear inside. The key thing to remember in Quake is that you never want to sit still – just keep firing nails, shotgun shells, or lightning bolts at whatever enemies hove into view.

Today’s patch also adds in support for the Honey ‘add-on’. This is a mod that came out for Quake in 2012, created by ‘czg’ – who is better known as Christian Grawert these days, as he’s now a senior level designer at MachineGames.

In any case, Honey is a highly atmospheric level that features an abandoned village and a spooky church, below which you’ll discover spooky cavernous ruins and subterranean workshops.

From the main menu, just select add-ons, and you’ll find Honey in the list of available mods. It’s a small download, and once it’s completed, just select activate to dive in.

If you own Doom Eternal or Quake Champions, this update also adds new skins to unlock for those games – you’ll just need to log in with your Bethesda account to claim them.