I wouldn't blame id Software if it never makes another FPS game again. With Doom Eternal, the studio has practically pushed the genre to its breaking point, and some crusty purists would argue it went too far. In any case, Doom Guy needs a little time out – go curl up in a prolapsed gore nest and catch some Zs, big fella – while id tries to figure out where it can possibly take the series next.

But what about id's other '90s FPS titan, Quake? Sure, Bethesda kindly dropped a free, enhanced edition of the 1996 shooter during QuakeCon 2021, but what if it received the full-blown reboot treatment à la Doom?

Quake is unusual as a series in that it lacks a single consistent vision beyond turning monsters into chunks of flesh. The original game blended dark fantasy and sci-fi with Lovecraftian horror, boasting 3D tech that allowed for vertical level design that was revolutionary at the time. Sadly, its tumultuous development – including cut RPG mechanics and third-person combat sequences – led to the departure of level designer John Romero, for whom the game had begun life as a passion project.

With Romero gone, 1997’s Quake II swapped eldritch spawn for more generic alien cyborgs, while retaining that best-in-class gunplay. 1999’s Quake III: Arena shifted gears to multiplayer, and basically invented esports. Then Raven Software took over for 2005’s Quake 4, an intriguing continuation of Quake II that plays like Medal of Honor with space marines and biomechanical body horror. We can skip over the Battlefield-like Enemy Territory: Quake Wars and the free-to-play Quake Live. More recently there’s been Quake Champions, which returns to the online focus of Quake III, but adds a hero shooter twist. 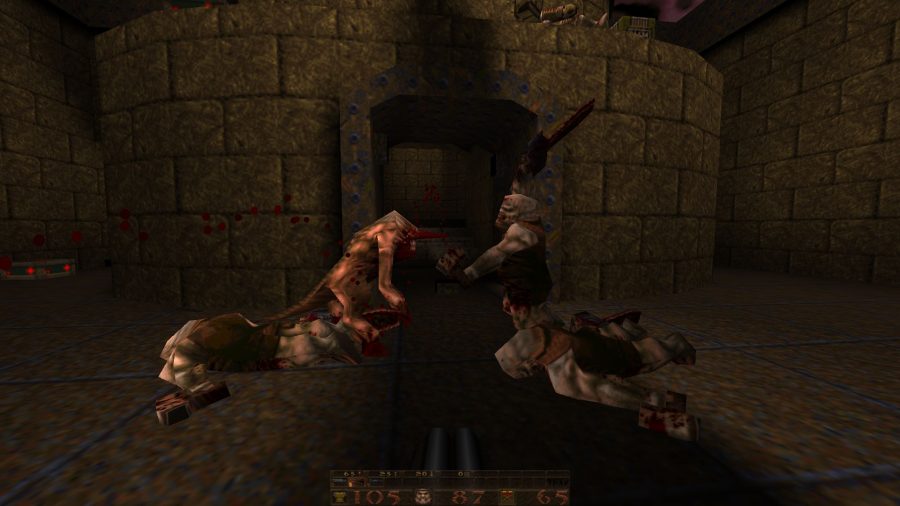 It’s all over the place, so for the sake of simplicity let’s stick with the original. We’re talking Slipgates, Shamblers, and a whole lot of nondescript, muddy texturing. How could id go about modernising that?

There’s already plenty of cross-pollination between Quake and Doom, so the obvious adaptation is letting players tear around Doom Eternal-style arenas with Quake’s iconic arsenal. Out with the demons, in with the supernatural abominations. Some new wallpaper, bit less lava. Job done.

But what about getting around? Doom Eternal’s Meat Hook guarantees a searing pace whenever the action starts, and id could achieve a similar effect with Slipgates, which provide an in-universe teleportation system for players to zip around as they glory-kill Grunts. With some creative placement by id, players could navigate arenas at breakneck speeds, finding and perfecting routes as they play and replay each level. 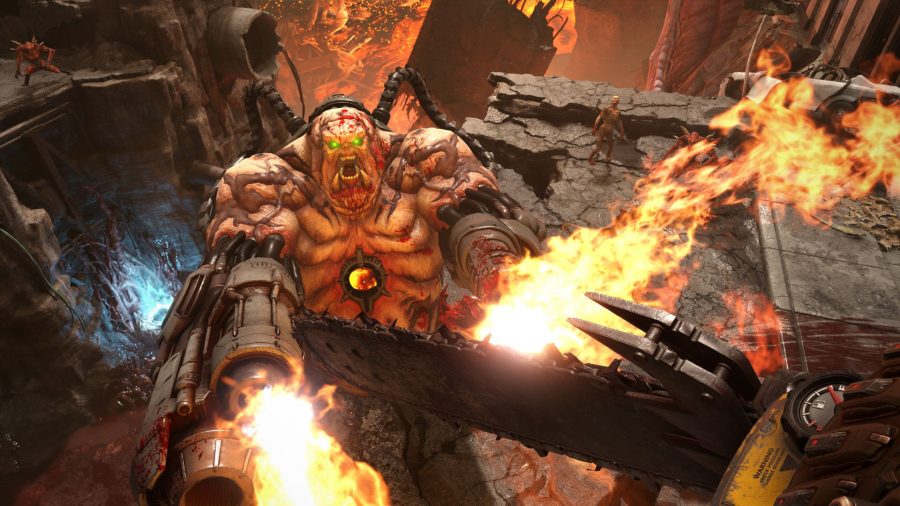 This also gives id a chance to fix what didn’t quite work back in 1996. Take the axe, Quake’s utterly useless fallback weapon that never gets used because players start off with a shotgun. A reboot could upgrade the axe, turning it into a devastating tool for replenishing resources like Doom Eternal’s chainsaw, or even a power weapon like the Crucible. Likewise, Quake’s rather anticlimactic boss fights could finally be updated to match the thunderous encounters seen in recent Doom games. Telefragging Shub-Niggurath would be a lot more satisfying if she could put up a proper fight, rather than just summoning a bunch of enemies you’ve already beaten before.

Hell, why not resurrect Romero’s original action-RPG vision for Quake?

A reimagined Quake could definitely benefit from more telefragging. In case you’re not au fait with this concept, a telefrag is when you teleport inside an enemy, exploding them into spineless mush – it’s beautiful. Quake Champions distilled this method of dispatch into a recharging ability for Ranger called the Dire Orb, which you could throw and then teleport to. Part mobility tool, part insta-gib weapon, it’s the perfect bit of kit.

But despite their obvious similarities, Quake stands apart from Doom in a couple of important ways. Before its multiplayer incarnations, Quake was the slower paced of the two series, pitting you against fewer, more dangerous enemies. Meanwhile its cosmic horror setting and Trent Reznor’s industrial soundscape created an unsettling vibe quite unlike Doom’s heavy metal adventures in demoncide. 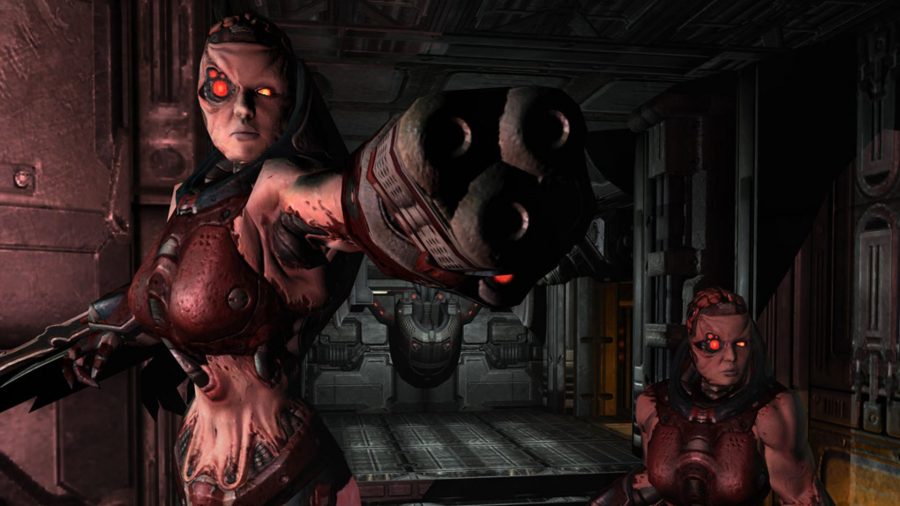 If the idea of matching Doom Eternal for pace doesn’t pique Todd Howard’s interest then id could turn to an unlikely source of inspiration: 2004’s Doom 3. This was id Software’s controversial foray into outright horror, and is generally regarded as the black sheep of the series – although for the record, I adore it. While its haunted house design tropes weren’t the best fit for Doom, they could find a home among the gothic dungeons of Quake.

Its rogues’ gallery of interdimensional monstrosities certainly suit a horror-shooter. Imagine navigating the depths of a labyrinthine, cyclopean citadel with only a flaming torch to light your way. A chainsaw-wielding Ogre lurks in the shadows, arachnid-esque Vore skitter across the ceiling, and it’s all brought to life in horrifying detail courtesy of id Tech 7.

Hell, why not resurrect Romero’s original action-RPG vision? Now, I’m certainly not suggesting Quake should feature crafting mechanics or skill trees, but the concept of melding id’s trademark FPS action with the framework of an adventure game is fascinating. 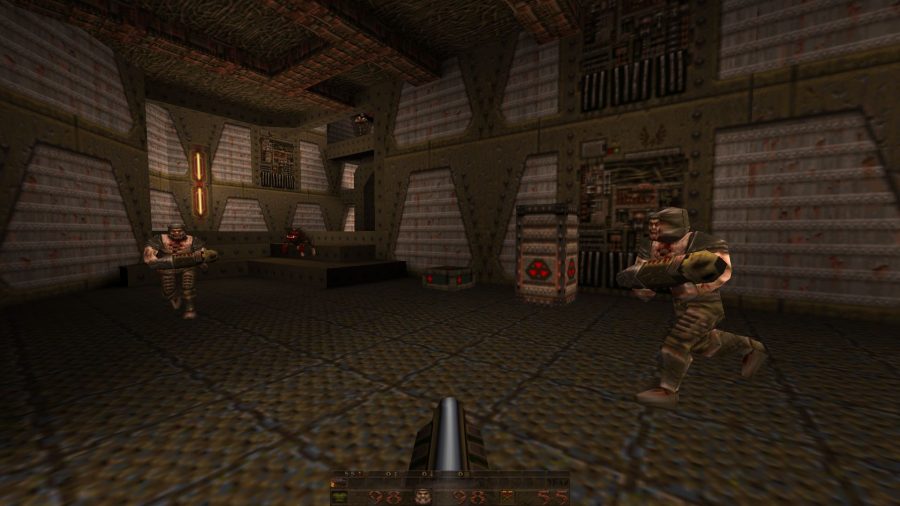 Quake’s very limited central hub – a timeless, astral area where you start each episode – could be the basis for an interconnected world, complete with side quests, collectables, and respawning enemies. That’s right, at the risk of angering the entire fanbase, I’m basically pitching Quake Souls. It does have a certain ring to it.

For now, we get to relish Quake’s HD reissue, with which Nightdive Studios has done an incredible job. This is the most attention Quake’s had since Champions, and hopefully this is Bethesda testing the waters ahead of a full reboot. Because if Doom is eternal, then Quake is inevitable.

What if?’ is PCGamesN’s regular feature series. Check back every Saturday for more hypotheticals, from thoughtful speculation about actually-plausible industry developments, to dream crossovers, to nonsense like Half-Life 3 happening. If you’re yet to explore the Quake series then you can play most of the series via Game Pass for PC.