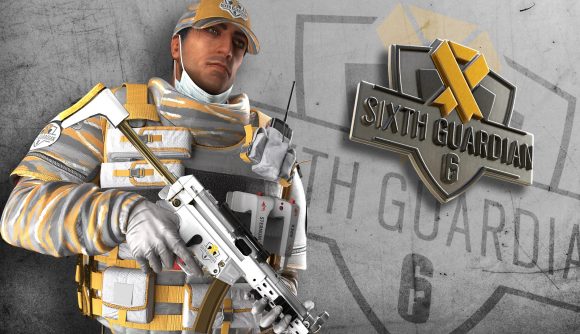 Ubisoft has announced a new line of Rainbow Six Siege bundles that will directly benefit charity groups. The initiative is called Sixth Guardian, and its first is a set of cosmetic items is for Doc. All proceeds from the bundle will go to AbleGamers, a group dedicated to making gaming accessible to people with disabilities.

“AbleGamers is honoured to partner with Ubisoft to support players with disabilities with this amazing Sixth Guardian bundle,” said Steven Spohn, AbleGamers chief executive officer and director of peer support. “We couldn’t be more thrilled to have the ranks of the Rainbow Six community joining our quest to combat social isolation and improve the quality of life for people with disabilities by providing the equipment and knowledge they need to play in the virtual worlds we love so much.”

The bundle itself features a new uniform, weapon skin, charm, and headgear for the FPS game’s defender Doc, all done in AbleGamers’ orange, white, and grey colour scheme. Doc’s face is uncovered, with a surgical mask pulled down. He’s wearing a ballistic vest with short sleeves over a cuffed cold-weather top, all done in a tiger-stripe camouflage pattern accented with badges that display the new Sixth Guardian logo.

“We decided to launch the Sixth Guardian because we recognized an opportunity to mobilize the Rainbow Six Siege community around important issues,” said Siege lead community developer Karen Lee, the creator of the Sixth Guardian program. “Our players are so passionate, and we wanted to give them an easy, effective way to support incredible organisations like AbleGamers.”

AbleGamers connects gamers with disabilities with the tools they need to fully participate in videogames. The charity provides custom equipment such as adaptive controllers to find ways for anyone to play, no matter what kind of disability they may have. The players never pay for AbleGamers’ assistance, and so funding through programs like the Sixth Guardian and last month’s ‘#Unlocktober’ campaign is crucial.

You can find the Sixth Guardian bundle in the Rainbow Six Siege in-game store, or on the Ubisoft online store.