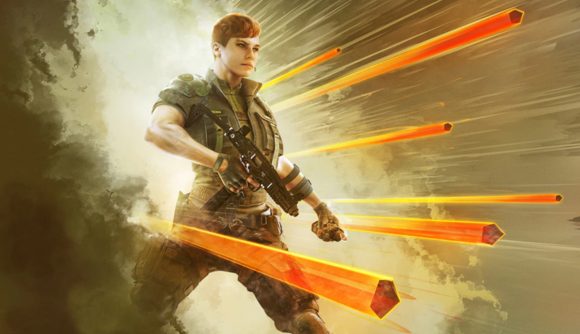 The week of Rainbow Six Siege teasers continues as Ubisoft slowly unveils the details for the new season, High Calibre. Earlier this week, we got the season’s name and a look at a new weapon – now we’ve gotten a cinematic look at the new operator, Thorn, and a clear demonstration of her new gadget.

Thorn will be in the Defender role, and if the red hair and accent in the trailer don’t give it away, she’s Irish. Her gadget is a sticky grenade that can be placed on a wall – it apparently works as a trap, because we see it explode into shrapnel when a group of enemies get close. We also see her wielding what appears to be the new SMG that appeared in the earlier teaser.

This all matches with what we’ve heard about Thorn from dataminers leading up to this reveal. According to the leaked info, those explosives are called Razorbloom Shells – once one is triggered, it’ll turn red, then explode after a small delay, dealing proximity-based damage to enemies.

Check out the teaser for yourself below, or get a bit more lore on the official site.

Expect more on High Calibre as we get closer to the next Rainbow Six Major starting on November 8. For more FPS games to check out in the meantime, you can follow that link.