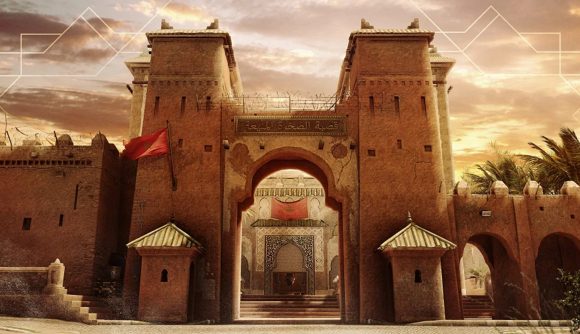 After a bunch of teases (and no shortage of leaks), Ubisoft has finally lifted the veil on Rainbow Siege’s new Morocco map, Fortress. The new map will be available in Operation Wind Bastion, and as the developers joke it’s finally “a fortress map for a game with ‘Siege’ in its name.”

Fortress is a traditional Moroccan Kabash with fortified walls and towers along multiple sets of exterior stairs to let players easily get around. There are living and training spaces within the walls, and a newly-renovated commander’s space with more luxurious fixtures.

It’s also “the first map heavily associated with an operator” – namely the defender among the new Wind Bastion operators – and as the developers note in the blog post this is “a fortress fit for a commander atop a hill with a 360° view.”

Ubisoft also officially launched the trailer that leaked earlier today on Reddit. That gives us interior shots that flit between utilitarian stairwells, opulent suites, and lounges where one could easily share a hookah pipe. Looks like there’s also a bathing area with a hot tub.

You can see that trailer below. (As always, Ubisoft has region locks on its videos – a UK version is available here.)

Here’s hoping the map lives up to expectations. Recent aesthetic changes in the game, supposedly made to conform with the Chinese government’s media requirements, have left the community in need of reasons to be positive.

We don’t yet have a Wind Bastion release date, but we shouldn’t be waiting too much longer – the full reveal is expected to happen on November 17 and 18 as part of the Rainbow Six Pro League Finals.