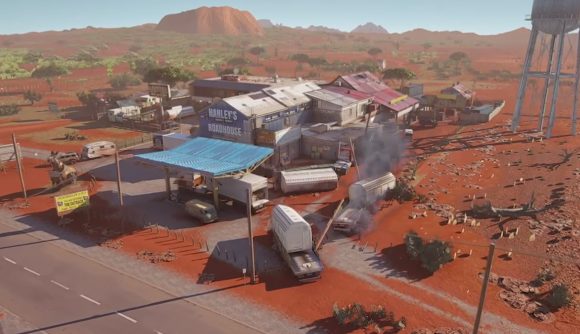 Rainbow Six Siege’s next season is called Burnt Horizon, and as all those weeks of leaks suggested, it’s set in Australia. Ubisoft has just provided a close look at the season’s new map, which appropriately titled Outback. Set along a rural Australian highway, the map features a roadside service stop that’s now home to a crashed nuclear convoy.

The map is divided between three sections: the garage, the motel, and the restaurant. Assistant level design director Jacques Wong says the team “put a lot of effort into making sure each section is recognisable, even from far away. There are specific colours for each section, and we used lighting and geometry to direct the player’s gaze to where they need to go.”

We’ll find out more in the Year 4 reveal at the Six Invitational this weekend, but Ubisoft’s blog post offers some notable details on what to expect. The developers drew on classic maps like Oregon and Clubhouse to design this one, for example, and although “there’s a limited number of doors between each sections,” Wong says “Roamers can still create new paths by destroying walls, and there’s always the option of changing floors as a flanking strategy.”

You can see some of that design in action via the trailer below. If that video is region-locked for you, you can also see it on Twitter.

Read more: Check out all the best FPS games on PC

Expect the Burnt Horizon release date to hit on March 5, based on previous season releases. PC players will likely get their usual first taste on the Technical Test Server a week ahead of the full launch.