The Logitech G502 has many challengers, with plenty successfully replicating its precision, comfort, and abundance of buttons. However, it’s rare to find a gaming mouse that includes an unlockable scroll wheel, let alone does it better. The Razer Basilisk V3 not only lets you to spin it to your heart’s content, but it’s now smarter than ever with the option to automatically unlock depending on how hard you flick it.

While the G502 uses an analogue button to switch between the two scroll wheel modes, Razer opts for a digital connection with the Basilisk V3. You still have access to a dedicated button that switches between standard and resistanceless scrolling depending on your preference, but it’s remappable if you want to give it another function.

This is because the Basilisk V3 has another trick up its sleeve: the smart wheel. By diving into the Razer Synapse 3 software, you can instruct the mouse to automatically enable its free-spin scrolling mode when you spin it harder, and it’ll revert right back to tactile the moment it slows down.

It’s an innovative approach that would position the Razer Basilisk V3 as the ultimate all-rounder if it weren’t for its sheer inconsistency.

The ‘Smart-reel’ is overly sensitive and sometimes has a mind of its own. There are times it inadvertently activates and changes my weapons in Rainbow Six Siege during do-or-die moments – I know what you’re thinking, but leave my poor choice in keybindings alone. And if you even slightly slam your rodent on your mouse pad, whether in frustration or just repositioning it, this can also set the scroll wheel off. Since this seems to be a problem with the detection, you’ll get the best experience by keeping it locked or using the button to manually release it instead. 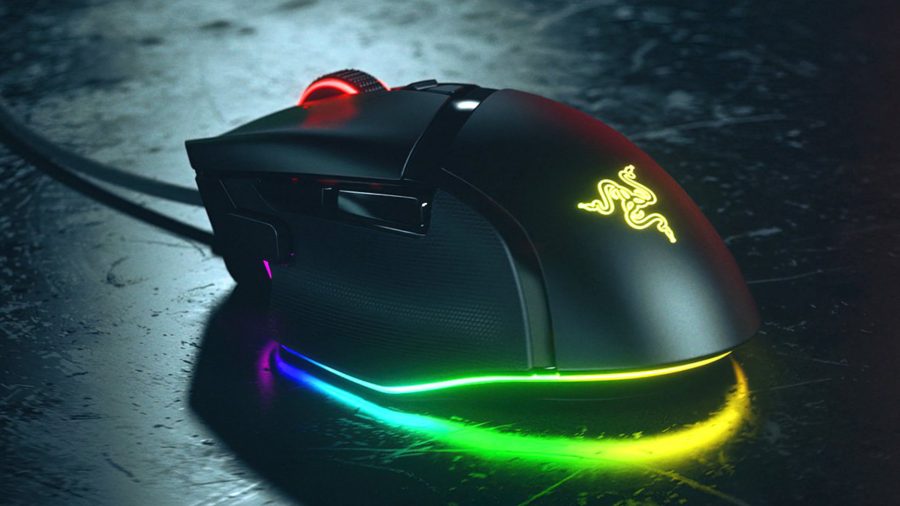 Even without its headline feature, however, the scroll wheel is still arguably better than most. Productivity users can make use of Razer’s virtual acceleration feature, which increases the mouse wheel’s scroll speed the faster you spin it, while gamers can enjoy the two extra buttons the tilt wheel has by flicking it left or right. It does feel noticeably cheaper than the metal wheel found on the likes of the G502, but the plastic construction only helps to make it lighter (not to mention it’s not prone to rusting).

At 101 grams, it’s far from the lightest gaming mouse I’ve tested, as the SteelSeries Rival 5 comes in at 85g with somewhat of a similar design. That said, you’d be forgiven for thinking the Basilisk V3’s lighter than it is with just how easily the PTFE feet glide along the mouse pad and how naturally your hand sits on the curves and contours.

Like others in the series, it’s quite a low mouse that lacks the hump seen on the Razer DeathAdder lineup, but it’s still comfortable with a wing to stop your thumb from dragging. This ergonomic approach keeps you from fatigue after a long day of clicking. Its shape naturally coaxes you into using a palm grip over any other style, even without you realising, but it’s still a breeze to use if you gravitate towards fingertip and claw grips thanks to soft rubber cushions on both sides. 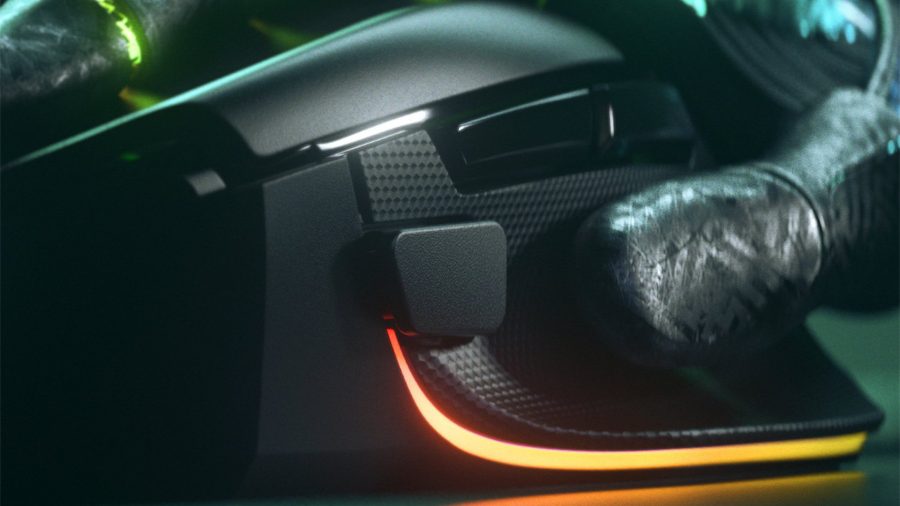 The 26,000DPI sensor is mightily excessive for most people, but the sensitivity is there should you find it useful. I cap out at around 2,000DPI on desktop before it becomes a little uncomfortable to control and tend to stick within the three-digit mark in most games, but the sensor has yet to let me down.

Alongside your usual dedicated DPI button that lets you flick between up to five presets, the Basilisk V3 also comes equipped with a precision aim button on the left side. You can change what this thumb button does in Synapse, but by default, it’s a temporary DPI shift that reduces your sensitivity for as long as you hold the button. Since this is a type of macro, it’s usually against the rules in a competitive environment, but can certainly give you a leg up in FPS games if you want to finetune your aim mid-gunfight. I tend to bind it to other functions, like push-to-talk.

The button is better placed on the Basilisk V3 than on the SteelSeries Rival 5, being close enough not to stretch your thumb, but like the scroll wheel, it feels a little cheap with a slight wobble. It’s not distracting so much as a small disappointment in an otherwise well-crafted and beautiful mouse.

It wouldn’t feel like Razer without Chroma RGB lighting, and the Basilisk V3 sports 11 lighting zones you can independently customise and sync with the best gaming keyboard and pretty much any other product sporting the snakehead logo. This gives it an underglow that’s reminiscent of a suped up street racer, glowing on the mouse mat below. Given your hand often covers your rodent’s illumination, this is a welcome addition that gives your setup a bit of personalisation and flare even when you’re in the thick of it. Just do your peepers a favour and try not to play in the dark no matter how good it looks. 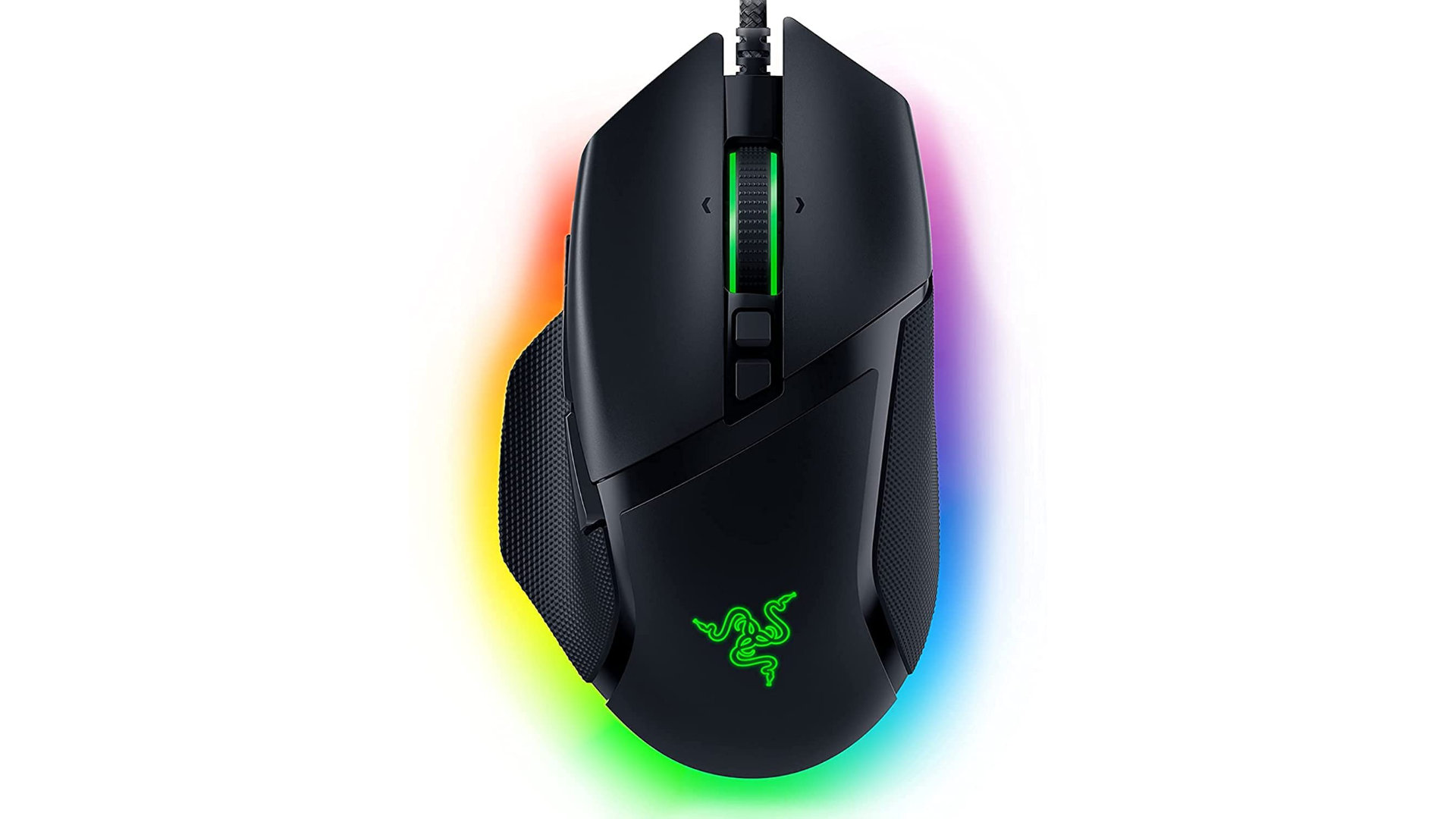 You won’t need to interact with the software too much as it has on-board storage to remember your preferences when you switch back to your gaming PC from your gaming laptop. That said, you might want to head into Razer Synapse 3 to set things up, whether it’s turning the smart reel or scroll acceleration on, customising macros, changing your DPI stages, playing with the lighting effects, or calibrating your lift-off distance. It’s worth mentioning that Razer Synapse 3 isn’t compatible with macOS, so you’re stuck with no customisation on Apple systems, but it’s fully fledged on Windows and pretty user friendly once you get past the bloat.

Razer undercuts the MSRP of the Logitech G502 and its own Basilisk V2 by at least $10, slapping a tempting $69.99 price tag on the Razer Basilisk V3. It’s easily justifiable, too, with a solid design, great sensor, pleasant RGB, and new scroll wheel technology – at least when it works. With the inconsistency of its headline feature, the Basilisk V3 flirts with the idea of being the best gaming mouse of 2021 while falling ever-so short. Smart scroll wheels have to start somewhere, and I certainly want to see a new and improved version moving forward. But until then, you might fare better looking for a Logitech G502 or Basilisk V2 on sale, as they’re regularly a steal below $39.99.

A fantastic gaming mouse that aims to be a productivity powerhouse, but trips up on its overly sensitive smart reel feature.