There’s a ton of great multiplayer games, co-op games, battle royale games, and autobattlers out there. You name it – if you want to best or battle others for fun, there’s a videogame out there for you. With games like Fortnite breaking boundaries and playing host to cinematic power houses like Star Wars, the sky(walker)’s the limit for online multiplayer right now. And yet, with the holidays now upon us, I find myself wondering if the Christmas break really is the time to loadout, dive in, and send foes packing.

I don’t think so. Instead, it’s a time for exquisite near-seclusion. Time to batten down the hatches, light a fire, and just retreat with a handful of the awesome people in our lives. But, where does this leave stalwart gamers like us? As wonderful as all that festive fun can be, the holidays are also a great time to get your teeth into those games you’ve had stacked and getting dusty on your ‘to play’ list, and – whether you’ve had the pleasure of playing it yet or not – I think sitting at the top of that pile should be Rockstar’s glorious and gritty western game, Red Dead Redemption 2. Mild spoilers follow.

Here’s my thinking: Red Dead Redemption 2, the follow-up to 2010’s sequel-prequel, which explores the exploits of troubled fin de siècle cowboy Arthur Morgan and the Van der Linde gang, is like a really good book. While it has an online accompaniment, the single-player story mode is a perfect choice to indulge in over Christmas because it’s a game about people – flaws, fighting, and fun included.

Yes, there are fantastically explosive moments in the train robberies, gunfights, and scrimmages that follow your sassy backtalk to NPCs gone wrong. And it’s a really great game in the more conventional sense: chasing down enemies on horseback, scoring a clean run of headshots in Dead Eye, and even the crack of its rifles make it a heady experience. But there’s always an undercurrent of supremely well-crafted narrative – the sense that everything you do is against the backdrop of a changing world in which Arthur’s kind isn’t welcome. It’s far from rosy most of the time, but it’s wonderfully human. 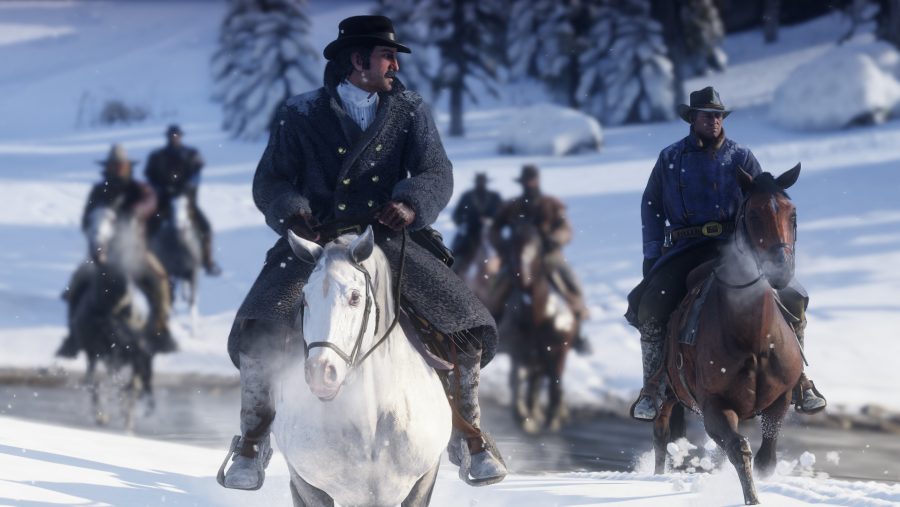 I recently wrote about how Red Dead Red Redemption 2 nailed ‘boring’ gameplay before Death Stranding came along, and this is one big factor. RDR2 delivers different things and makes different demands compared to a lot of other open world games – such as Rockstar’s Grand Theft Auto V. Red Dead 2 is a story about some rag-tag humans trying to make the best of a difficult life, and even in the minutiae of its gameplay it richly evokes that feeling of human connection that we might turn to classic stories and Christmas movies for.

Think of it as a kind of Dickens-esque classic

Think of it as a kind of Dickens-esque classic. It’s got a gritty, determined (though morally flexible) lead fighting a bigger fight, with some zany accomplices (Dutch), a long-lost love to regret, and a big misunderstanding at its plot’s core. There’s intrigue, conflict, death, hope, and the (near-)triumph of good over bad. Sort of. Ok, it’s not exactly Great Expectations, but it packs the right kind of punch at this time of year, when you’ve got time to reflect and sink your teeth into something big.

It’s even got Jack Marston, a curious little bundle of innocence and cuteness born on the sharp end of the social scale, who you need to look out for. That’s positively Dickensian.

The game’s got a rich, branching story with interwoven plots, zesty characters, and just the right dollop of free rein, all leading you towards a spectacular – if sobworthy – conclusion. You might even cry. That’s something I crave at Christmas, and which, as great as they might be, no battle royale can give me in deepest December. 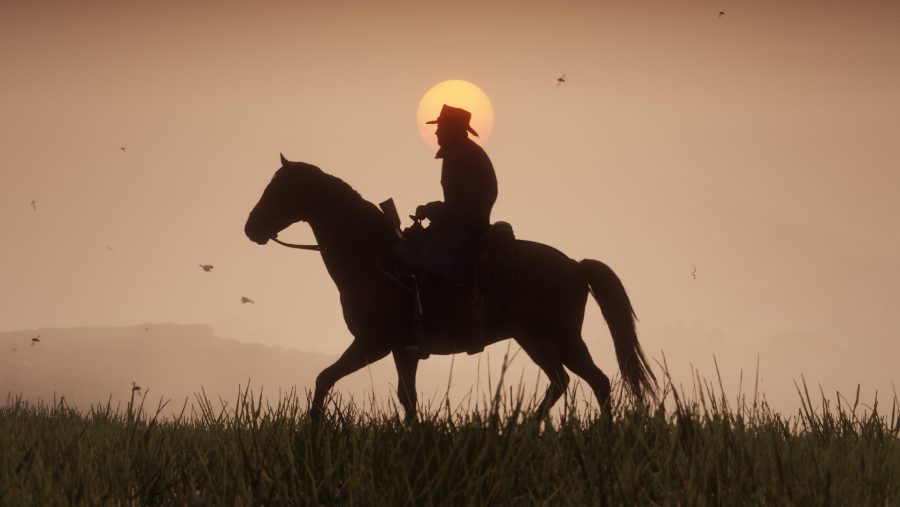 All of this you can get stuck into and enjoy over the Christmas break when you’ve got some time (and sherry, and mince pies) on your side. To truly enjoy what RDR2 has to offer, you need momentum – a good run of days when you can shut yourself away, and just ride off into the New Austin sunset. It can’t be truly savoured in snatched post-work sessions here and there – it needs the time and dedication you’d give to a good novel you’ve been putting aside to conquer in the holidays. As I’ve stressed before, with RDR2, the more you put in, the more you get out.

You can play multiplayer games all year round, but Christmas is a time for meaty adventures like Red Dead.

If that hasn’t convinced you, there’s also a ton of snow – loads – which you’ll notice as soon as you fire up the game. Don’t it just make that fire look all the cosier? Just don’t think about your fallen gangmates, wolves, or the impending peril. That’s not quite as Christmassy.