Riders Republic is a hell of a lot of game. That shouldn’t come as much of a surprise if you’ve been watching Ubisoft gradually turn series like Assassin’s Creed and Far Cry into hundred-hour RPGs, but while some might say that hasn’t always been the best decision in those cases, I mean it as a true compliment for Riders Republic; no caveats. It needs to be big for it to work, for it to feel fresh and deep simultaneously, but also instantly accessible, something you can pick up and play for a quick ten-minute session just to pass the time. Oh, and you can buy it here if that summary’s enough for you.

Extreme sports veterans Suki and Brett introduce you to the titular Riders’ Republic, which is an amalgam of several iconic national parks, including Bryce Canyon, Yosemite, Zion, Grand Teton, Sequoia, and Canyonlands. Suki and Brett are both kind of insufferable, speaking solely in slang that you can imagine parents using in vain to connect with their kids. The republic is “vibing”, it’s full of “bucknutty riders”, and the first set of events you’ll be taking on are, naturally, “off the hook”. It’s like the script was pieced together by an AI doing a Jack Black impersonation. Fortunately, they don’t badger you much beyond the game’s opening, and they’re happy and kind and warm, so it’s hard to harbour too much disdain for them.

Once they’re gone you’re pretty much free to explore, compete, and mess around to your heart’s content. The map is enormous. Genuinely gargantuan. But it feels bigger the more you retread (or should that be reshred?) slopes and valleys you’ve already ridden through. You’ll notice that a single downhill slope can be approached in several different ways. You can speed down the precarious hairpins on a road bike, bomb through the mud on a dirt bike, ski the receding patches of snow, or skim across the ground in a wingsuit. Better still, you can seamlessly switch between all of them with a couple of button presses, much like in The Crew 2. And what do you do when you reach the bottom of the hill? Fast travel or trudge all the way back to the top? Nah. Just equip your rocket suit and fly there.

While you’ll need a certain amount of progress to unlock all of the core vehicles, you get the rocket suit from the start, which means you never have to waste time trying to reach a specific ramp or event. All fast travel points are also unlocked by default, so you can jump to any of the different regions as soon as the tutorial finishes. You’ll gradually explore the entire map by completing events anyway, but if you’re aching to tear up the dusty divots of Arches within the game’s opening hours then there’s nothing stopping you. 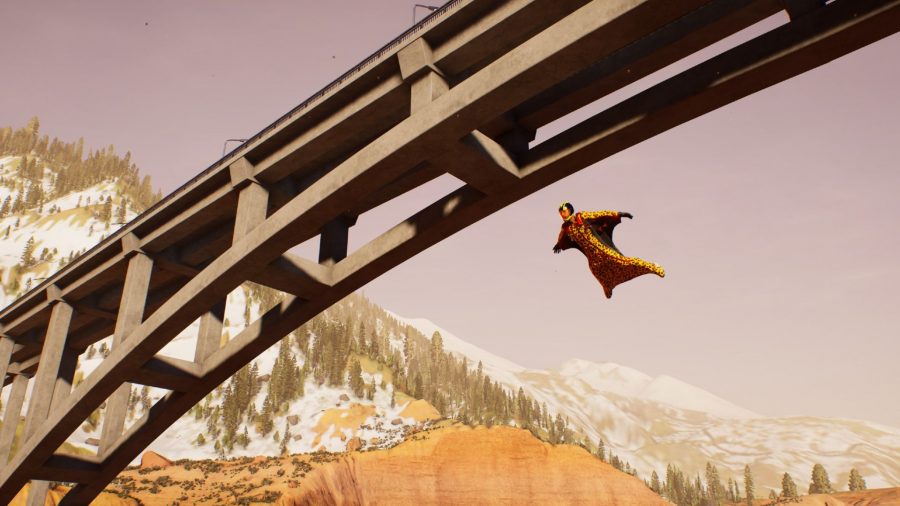 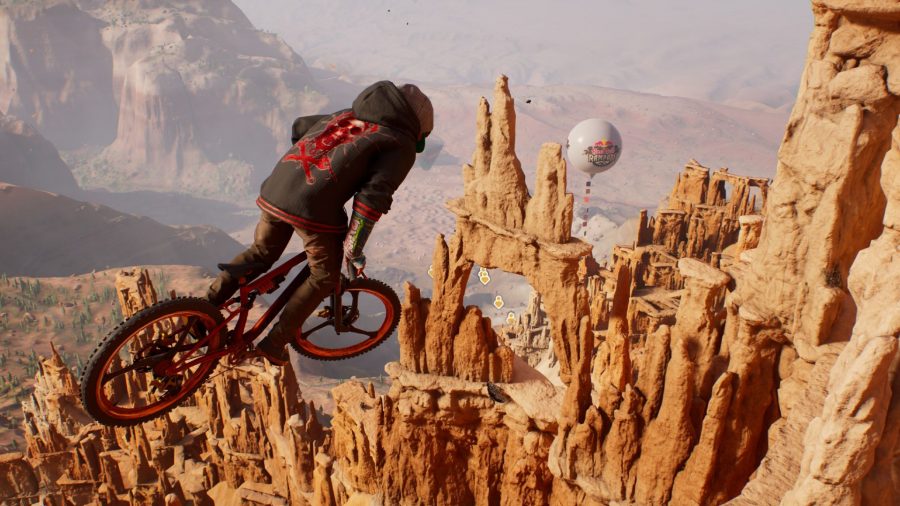 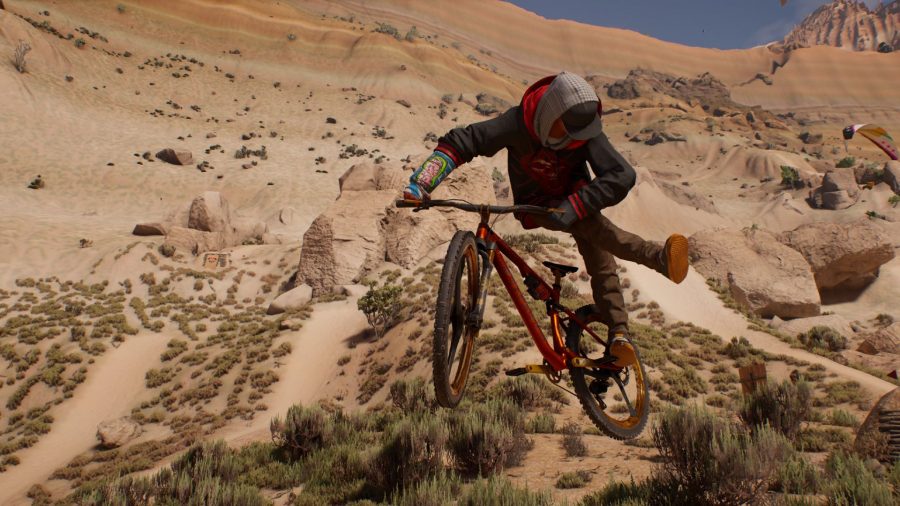 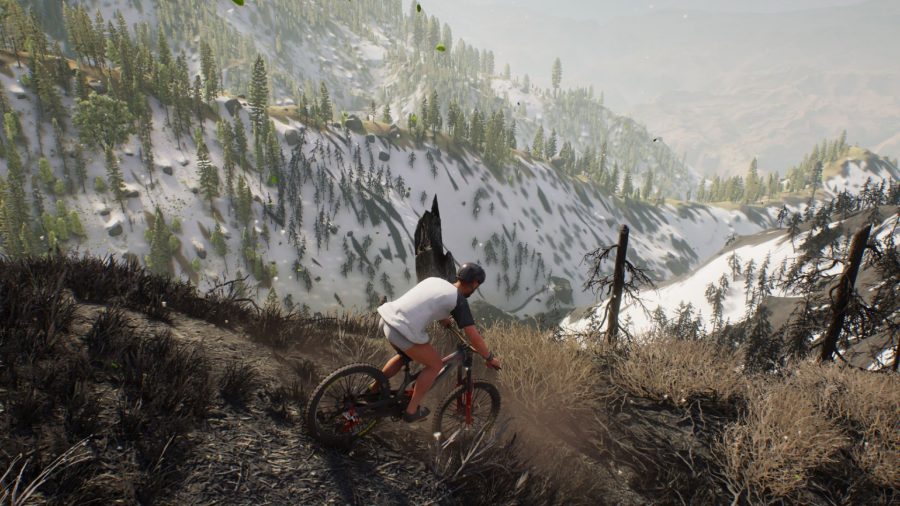 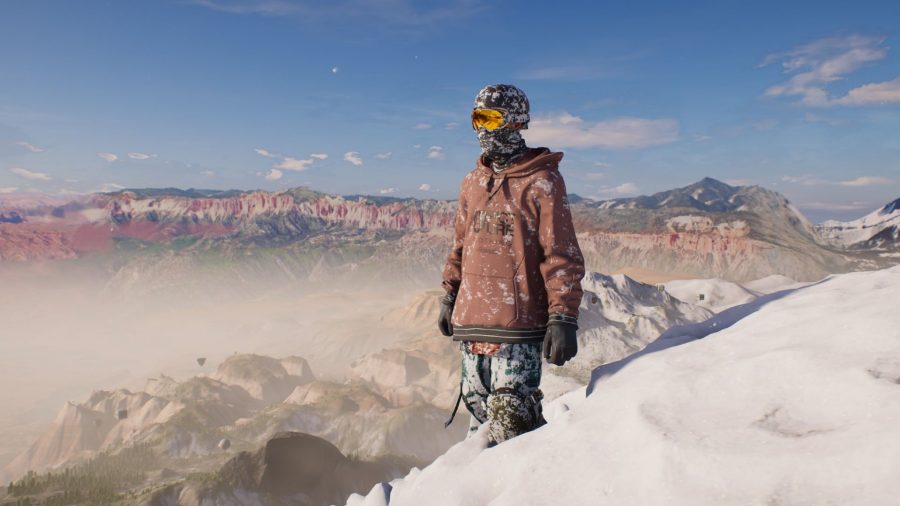 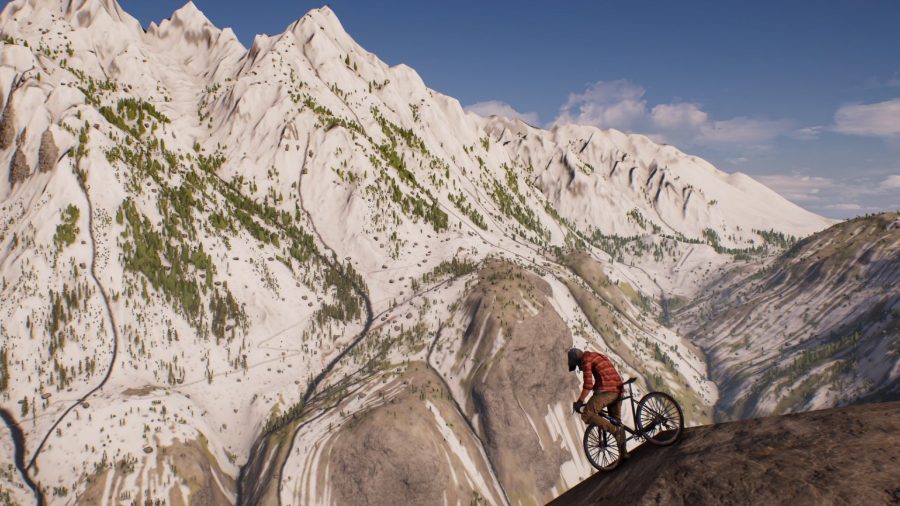 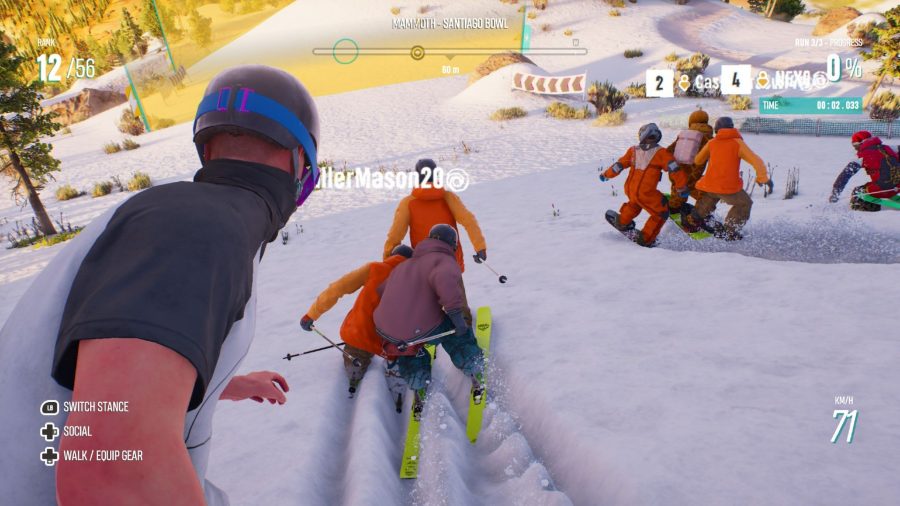 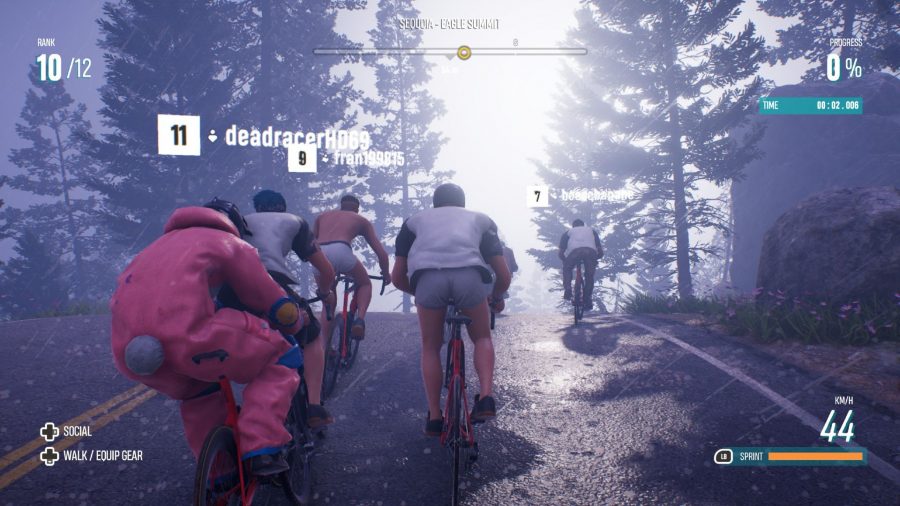 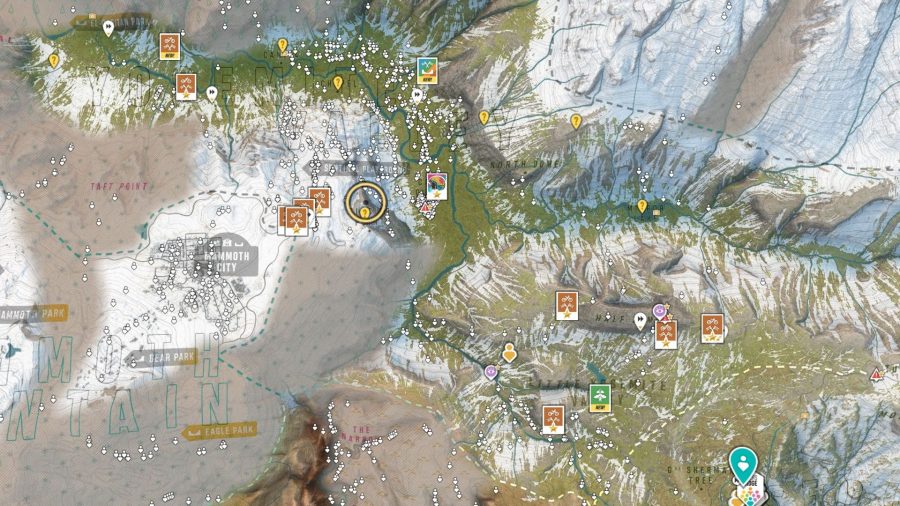 What’s really impressive is how Ubisoft has scaled Riders Republic’s social systems with such an enormous sandbox. No matter where I go across the open world I’m always surrounded by other players, or at least it feels like I am: Riders Republic records other players’ sessions and then replays them in your own, so that you’re constantly surrounded by people. And it works. I’ve tagged onto races I’m not taking part in, discovered intricate slaloming lines by following others, and watched hundreds careen off the side of a mountain after misjudging a corner. I do wish there were a way to get rid of some of those players when I’m composing a self-portrait on the peak of Yosemite’s Half Dome – I keep getting photobombed by a guy in a dinosaur suit – but it’s genuinely uplifting to be surrounded by so many other players.

This sense of scale and volume also applies to Riders Republic’s events. There are hundreds spread across several categories and subcategories. You’ve got road bike races, downhill offroad sprints, trick courses, wingsuit and rocket suit races, half-pipe trick events for skiers and snowboarders, events that mix some or all of the above, goofy events in which you’ve got to steer a lumbering delivery bike through an intricate obstacle course, and stunt courses that require maximum precision.

The stunt events are my favourites; they’re always diverse and challenging, and a real change of pace from the rest of the game. My first such event has me grinding the cables of a ski lift on Mammoth Mountain, while the next challenges me to navigate a treetop BMX course, gapping between branches and gingerly steering over zigzagging planks. 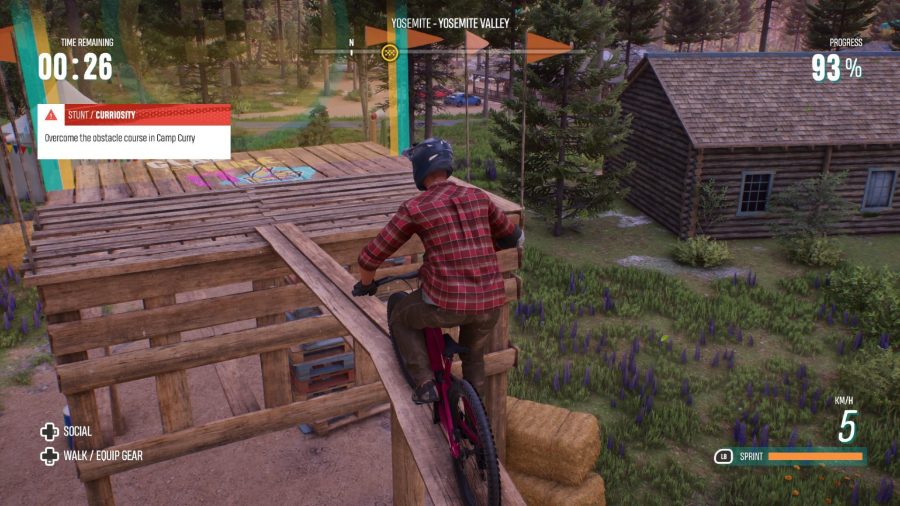 As you progress through each discipline you also unlock landmark events and boss races, as well as improved gear to race with so you can survive greater drops, sprint faster, or find more grip on muddy tracks.

All of this comes crashing together in mass race events, which are live, 64-player, multidisciplinary races which occur every half an hour or so in the open world. These races are an awesome tangle of limbs, boards, and bike chains, in which simply making it to the finish line without wiping out should net you some kind of achievement. 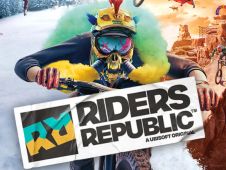 And while it does feel like luck is the biggest factor in claiming victory, they’re worth taking part in for the sheer spectacle of watching 60 people tumble down a mountain; Ubisoft has taken a leaf out of Fall Guys’ book by placing obstacles along the course to catch you off guard. 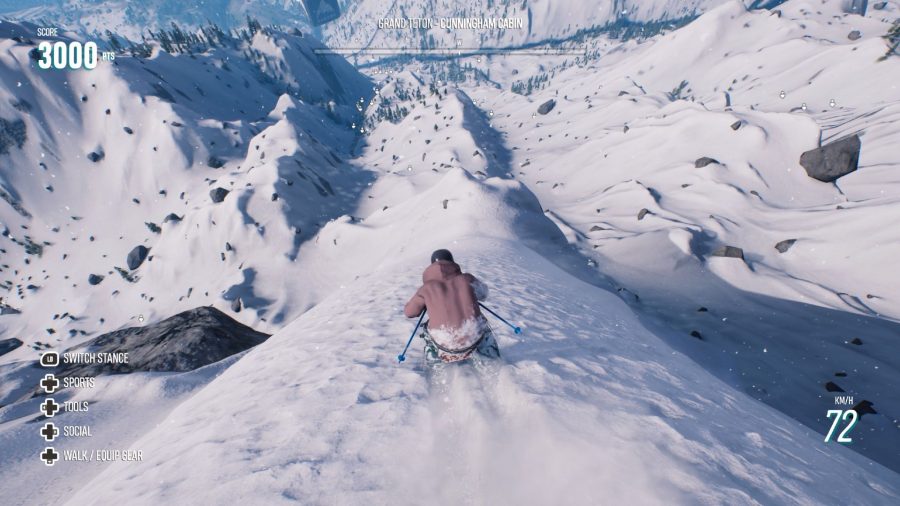 None of this would work without a really solid racing simulation underneath it all, and when everything works as intended, Riders Republic feels phenomenal. The difference in terms of grip and handling between a road bike and a mountain bike is night and day, and you can really feel subtle changes in the track like patches of mud, water, and gravel. But Riders Republic is best experienced at breakneck speeds on relatively clean tracks, where you can really pick up momentum and throw yourself into bermed corners, handlebars rattling the whole way down. It’s boneshaking, white-knuckle goodness, even if it’s pretty far removed from reality.

Tricks feel fluid and stylish, and there’s a ton of flexibility when it comes to mid-air readjustment, which is great for exhibiting some flair while you’re free roaming. You’ll need to switch to the more demanding trickster control preset to really start perfecting your moves, but it’s a deep system that captures some of the swagger and freedom of the Skate games.

There are, however, some pretty frustrating quirks in Riders Republic’s handling of physics, grip, and, er, handling. Often your bike will just clip a tiny piece of terrain and send you flying into a tree. When crashing through a series of tight downhill hairpins, the smallest bump in the course can throw your angle off, sometimes so drastically that I’ve emerged from corners upside down. Countless challenges rely on you winning or completing a course without backtracking, braking, or crashing, and I’ve had hundreds of runs ruined because of seemingly unavoidable kinks in the track. 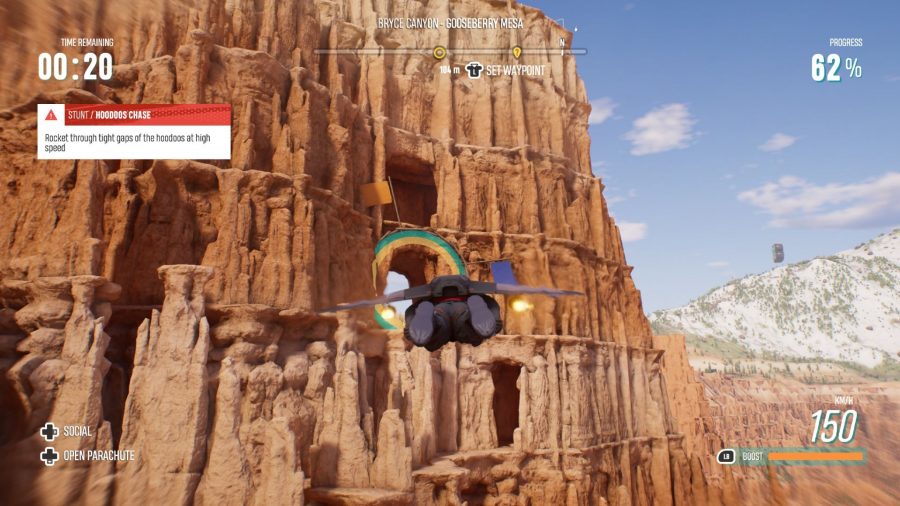 While Riders Republic generally excels when you’re hurtling down a mountain at over 100kph, its controls feel pretty mushy when you’re going slow, and this is particularly apparent on precise, technical courses where you need to carefully adjust your speed and angle. Dropping from one platform to another seems to add speed and forward momentum as if I’ve just dropped into a half-pipe, which often sends me straight off the course.

For a game that’s so approachable, there are some glaring oversights when it comes to onboarding. For example, there’s a particular area for learning tricks, which is great, but with hundreds to learn across several sports, actually remembering those tricks would in itself require hours of practice.

And yet there are plenty of races that task you with completing specific moves for bonus points, and the only way to find out how to perform these tricks is to leave the event, go back to the tutorial area, and go through the practice sessions until you see the move you’re looking for. Something as simple as a list of tricks in the menu, or an on-screen prompt for particular tricks during the event, would make it so much easier to master these moves. 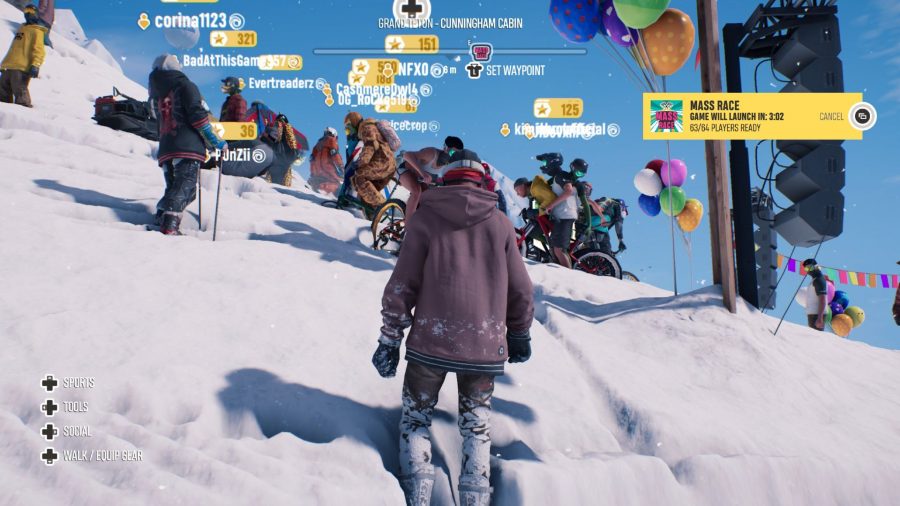 In many other games, frustrations like these would mount up, but Riders Republic ensures you never feel them for too long because there’s always something new to do, some audacious, death-defying feat to achieve just for the heck of it. Hey, look! There’s a mass race starting in a few minutes, better chuck on your rocket suit and make it over to the starting line. And ooooo! I wonder if I can take my folding bike down Bryce Canyon’s iconic hoodoos without dying.

It seems ridiculous to look at Riders Republic as Ubisoft’s answer to Forza Horizon, seeing as there are no cars in it. But in terms of fun, approachability, thrills, and variety they’re an exact match. And I’ll go further: I’ll say that I’ve had a better time creating my own fun in Riders Republic than I’ve ever had speeding around in a hypercar in Forza.

A sprawling, varied, endlessly fun open-world game, and a glimmer of hope for the extreme sports genre.