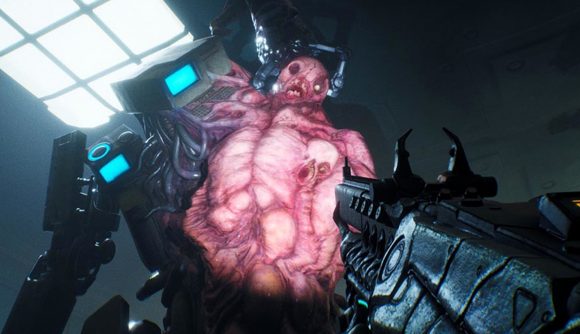 FPS publisher 3D Realms – who recently released the excellent retro shooters Ion Fury, Graven, and Wrath: Aeon of Ruin – has started the new year by teasing “something cool” coming in February 2022. Fans immediately pinpointed the teaser as related to Ripout, a Prey-like co-op horror FPS – which 3D Realms could now be publishing for a release next month.

In case you’d forgotten, 2006’s excellent portal-y sci-fi horror FPS Prey – the original, not the immersive sim reboot – was actually published by 3D Realms during the time when everyone was still expecting Duke Nukem Forever to be good. Sadly, Prey 2 never came to be and the rights changed hands to Bethesda.

The new FPS 3D Realms has just released a short teaser for is not Prey but appears Prey-influenced, and despite the publisher not mentioning it by name Twitter users immediately identified it as Ripout – a single-player and co-op horror FPS from Pet Project Games with a “living pet gun”.

Ripout’s Steam page lists the developer as the publisher, so it seems likely that 3D Realms has picked it up. Likewise, the game currently only has a vague “2022” release date, so the “February 2022” in the teaser probably means that it’s coming out sometime next month.

According to the website, Ripout features mutants that can adapt their bodies with “rogue technology and other, smaller monsters”, procedurally-generated levels that can be played in 15-20 minute bursts – and a living monster gun you can either fire or command to run at your enemies and rip their implants out.

Given how many of 3D Realms’ new games have launched in early access first – all of them, basically – it seems likely that Ripout could do the same. Either way, we don’t have long until we’ll find out for sure.