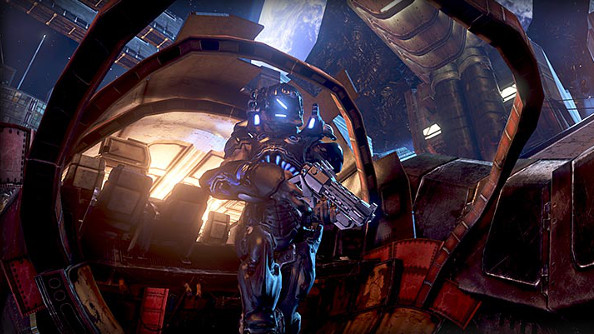 Before last year’s series reboot Prey, a follow-up to the 2006 original had been in the works by Human Head. Now you can watch almost a minute of footage from Prey 2, thanks to a New York-based games historian.

Check out our story on how Prey grabs your attention – and keeps it.

Andrew Borman, the digital games curator at the Museum of Play in Rochester, N.Y., shared a clip from Prey 2 sent to him by Human Head Games last week.

Seems like a good day to post a short video I was sent from @humanheadgames cancelled Prey 2. Still look forward to the day that I have more to share. #prototypes #prey2 pic.twitter.com/3Fl0lB4puN

It has a look and feel very different from last year’s Prey, which was a quieter, tenser game set in a space station ravaged by an alien menace. But it’s also a big departure from the first game. Here, we see a story sequel to the original, set in a neon-drenched city and characterized by a lot of run-and-gun FPS action.

Prey 2 was announced by 3DRealms shortly after the launch of the original Prey, but work didn’t begin until quite a bit later, after Betheda’s parent company ZeniMax bought the rights to the IP. Bethesda eventually cancelled the game, and rumors at the time claimed that Human Head had been hamstrung deliberately – claims that Bethesda’s Pete Hines has strongly denied.

But by the time it was cancelled, an ex-Human Head developer says, it was well beyond the point of being a demo and was a “full game.” It just turns out, it was a game Bethesda didn’t want any more.

We wound up pretty well off with 2017’s spiffy reboot of the series, but it’s interesting to see what might have been.